I have created several leotards for Symone of Pole Paradise HK in the past, as she needs to have fabric protecting her limbs when she is doing hoop acrobatic shows and wanted unique costumes.

She contacted me when I was at home in the UK and asked me to do two, one for her and one for her husband for an upcoming show.

I started Jose’s red tribal flame design with the leotard stretched over my trust shop dummy, but found that awkward to move about and hard to paint on.

I use the bottles and applicators I sell here. Videos of me waffling in so you can literally watch the glue dry…

I then managed to find an inflatable shop dummy to do Symone’s watery design blue leotard on, as of course she was in HK, so couldn’t fill out the leotards as I worked.

It usually takes several layers of glue, dried in between, to create a design sticky enough for the glitter to adhere too. Fabric glue does not work well – it dries too stiff- so I stick to my normal prosthetic adhesive which I knew does NOT wash out if you get it inot clothes, no matter how I try!

I also mainly use my cosmetic glitters from Facade, as I know that the dyes in them won’t leak and run.

Luckily this time the leotards ‘took’ the glue well and I was able to complete them within a week.

I delivered them to Symone when I was over to face paint at the Rugby 7’s.

We met up near the (in?)Famous Hong Kong Lady’s Market (it does have an ‘interesting’ range of men’s underwear!) as I’d had a request from my brother in Barbados for a few knock-off items. 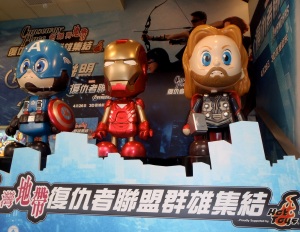 I don’t think I’d ever bought any fakes when I was living in HK, and typically, visiting for a short period so rushing round this time, it turned out there had been a huge police crack-down on fakes and there were few to be found!

The show looks like it went well and as the leotards can be hand-washed (I cool-machine-wash some of my glittered shirts) they can be used many times.