I left for Bristol after a hot days painting at Bewilderwood, and as the A/C in my car can’t be fixed, got so hot I had to stop and buy some lighter clothes to drive in! After a night at my mum’s I met Laurence and we convoyed to Painswick Art Couture. 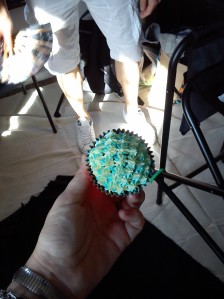 This year the body art side of things had been brilliantly organised (last year, their first time, was a bit scrambled). We were met in a beautiful building (and given cup cakes!!!!!) with areas roped off to paint in. Jill had everything sorted down to drink facilities and food runners…wow, and she was heavily pregnant too! Of course it was so scorchingly hot that we’d almost have been better off outside this year, trying to catch the breeze under the many (chilly last year in very different weather) gazebos. Huge thanks to Charlotte and the other runners who helped keep our models (and us) fed and watered.

The theme given was ‘Magic’ and a few weeks beforw I’d given Laurence the choice of something Celtic or Victorian, as I thought Voodoo etc was maybe a bit cheeky seeing as we’d be judged in a churchyard. He fancied Victorian, so Victorian Magic Man it was. I’d discovered whilst researching ‘magic’ that it was in that era that travelling shows started transforming into the stage magic more familiar to us now, especially with men inventing all sorts of mechanical tricks to wow their audiences and even electric lights being an amazing phenomenon.

Some people had ‘automatons’ that did all sorts of things, one could draw portraits of hundreds of celebrities. So, his front was my take on a steam-punk victorian robot, in a waistcoat and striped trousers and gloves with all sorts of exposed clockworks.

I’d turned up with some printed pics of lightbulbs, crows etc but hadn’t really sorted designs as is my usual way, although I’d had to send a detailed blurb in earlier for the judges! I used mainly Cameleon bodypaints, over a base (on the front upper) of Graftobian or Mehron gold powder and mixing liquid. The few bits of cog stencils were home-made, and a BAM one was used on the waistcoat. 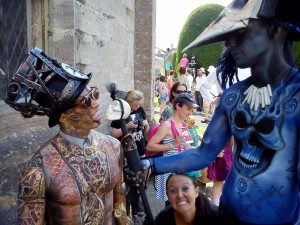 Nic’s the grinner below Petes arm

Fab venue, beautiful stone windows open to let the music waft in from the street entertainments (and a great view of the Battle of Britain flypast later on). We were painting beside Nic who was attempting to use the airbrush we’d all clubbed together to get her as a wedding gift (early) on her fiancee Pete. Many of the usual crew were there doing their amazing stuff, including Brierly and the vast height difference of a team that is Mel Broom and Will Shave.

LL’s back showed the transition from ‘hedge’ magic involving animals and the moon, to electrically lit stage shows. I was really pleased with this, and the hat I had made (after tips from a really worth-while ‘Foam Headpiece’ workshop with Alex Hansen) seemed perfect.

We finished a little early so went down for photos then out into the cooler day – our building was packed with interested public and steaming! I only managed a few snaps/ quick film as we shuffled through the crowds on the quaint streets (packed with really interesting stalls selling all sorts of crafts I’m dying to see) the rest of the time LL and Pete were mobbed.

Tony Cook stopped us in the churchyard to get our emails and sent these 2 amazing shots he edited from a snap he took of my half-finished paint on Laurence last year.

LL, Pete and some of the great work by students waiting to be judged- in the shade

It was so hot that this year all the models were glad to literally ‘chill’ inside the church whilst we waited for judging.

Then we were treated to a cocktail in another building before going back for the results. I loved the dress made from eggshells, and another from maps. 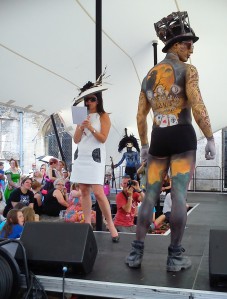 After hearing 3rd & 2nd place body winners announced I was just turning to LL to say, ah well, thank you it was great’ when we were announced as winners!

The top 3 – Laurence by me, Will by Mel Broom and Claire by Helen Eyre

Brilliant event, so many talented people, and huge thanks to the sponsors, Brewers Dolphin. I used their cheque to pay for the hotel rooms Laurence & I had booked for Nic & Petes wedding!