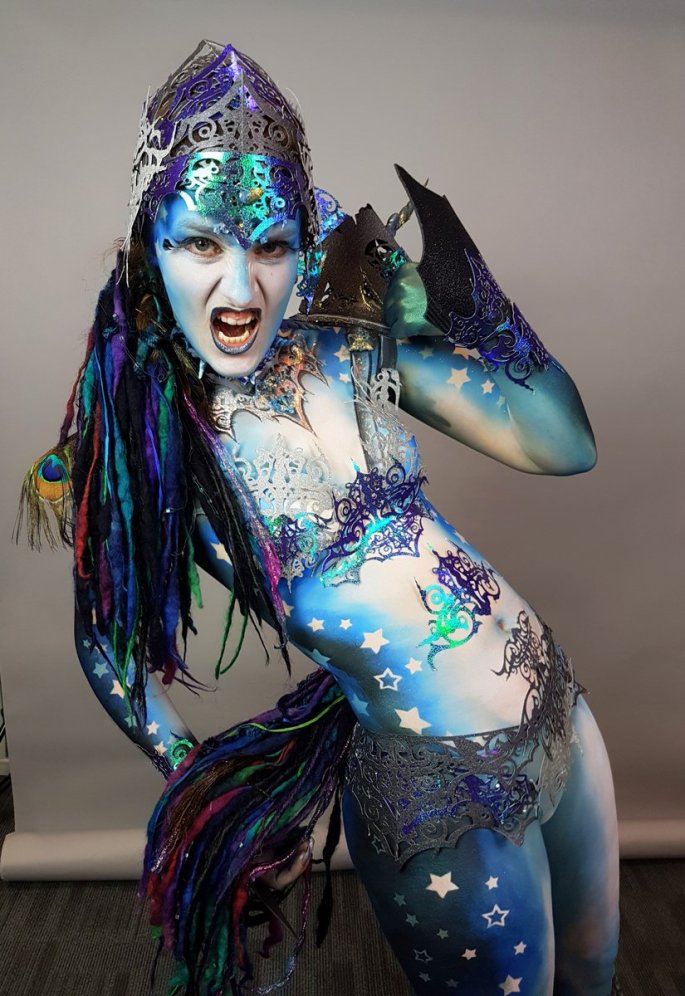 I’d designed a head/ neck paint on the marvellous Angela Youngs when she offered to model for me at the UK Face Painting Convention where I was demonstrating products for the Paintopia Shop, in Oct.

Angela was amazing as always, letting me stick a unicorn horn I’d made onto her rather funky feathery clip-in mohican, then going out in full punk anti-corn mood to harass the public, guests and even cars! The response was so much fun I though I’d have a go at a full body one for my next demo.

Paintopia Jenn kindly asked me to demo for her at the extremely busy Prosthetics Event, which is always hosted by the guru that is Neil Gorton. Angela was our other demo artist, painting her own model this time, and I was decorating Rachel Shar Marston for the 1st time – I’d seen her modelling at the UK FP con and nabbed her!

I love researching each bodypaint and this one was inspired by horse armour worn on medieval battle horses, with the non-rainbow unicorn twist.

One thing I had been thinking on was how to get different pale ombre effect shapes on top of dark tones, so I tried adding sticky star vinyl shapes I’d had my Cricut cut sheets of on top of each of 4 layers of darkening paints on Rachael, in different places on each layer.

Our work experience makeup student, Steve, (he was brilliant, had his first try at body painting on Rachaels legs too and is hopefully now addicted) had the fiddly job of finding and peeling off all these stars after I’d added the black final layer, to reveal different shades under each.

I wanted to try some different techniques, so has been talking to Cricut Uk re their new Cricut Maker machines which can cut my custom designs in much thicker materials than my current Cricut Air (which is 3 versions older). The plan was to do thick foam armour, cut on a Maker. Amazingly, they lent me a Cricut Maker to try all my ideas on! Typically I spent so long fiddling (making my mock-ups, so I could scan them to be cut in the foam etc) that I when I hit a fault with the special tool I had I didn’t have time to get it sorted by their helpful team in the USA.  Not a problem: I switched back to thinner material and ended up with a much prettier less tough and scary ‘armour’.

I’ve a fab giant foam horse head ‘hat’ I made on an EVA foam course with Alex Hansen, and wanted to do a variation on that. Preferable one I could easily recreate by scanning into my Cricut. I sketched and made mini versions, then scanned in my design, to make it cut out and then be tweaked again. Eventually I had a mini version of a 3D horse head which I planned to make in thick foam. 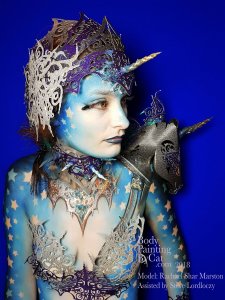 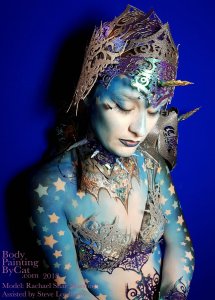 I drew a curly baroque engraving inspired doodle, scanned it in and then added shapes and patterns in Cricut Design Space until I ended up with a unicorn horned, spiky, shape. This I cut in various sizes and formations (sticking it to itself, elongating it, etc) from Hobbycraft Glitter card, metallic green textured card, Cricut faux leather, etc. I also cut and mirrored it to make ‘spikes’. 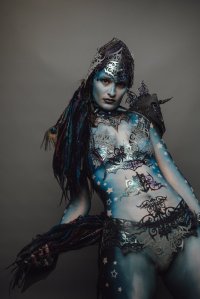 These shapes were layered into Rachels hair and glued onto her body with cosmetic adhesive (I sell the fine tipped cosmetic glitter tattoo application kits). I also had the Cricut cut thin foam ‘hooves’ for all four of her limbs which we glued to her wrists and shoes. We decided the smaller horse head looked better as a protective shoulder pauldron and glued it on there. 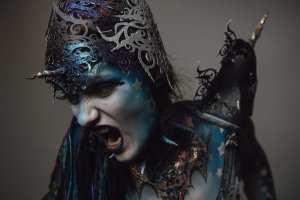 The wool and feather dreads on elastic I bough years ago on Ebay and have added to, they have been in so many bodypaints! One was tied into her hair under the horse-neck armour, the other was tied round her waist as a ‘tail’

Some one stroke leather strapping, gluing on and painting the dozens of assorted sized unicorn horns I’d made form paper clay (I sell them too), some fine glitter tattoo work  and Rachel was finished, all whilst answering questions from the curious crowds.

She swaggered off in appropriately punk-ish mood, swinging the original giant foam horse head, sneering with attitude which was perfect for her character, and posed for photos until the stage show.

Thanks to everyone involved, brilliant, busy event as always and I hope to see you all there next year!