Like all painters I have been forever trying new ways of carrying and presenting my kit.

In the beginning (wayyy back in 2000), all that was available was the blue plastic trays for Snazaroo. Nice idea but the blue looked very kiddy, they snapped really easy and I soon had them all taped around the edges, and the lids didn’t last long either. Plus I didn’t stick with Snazaroo paints for long, and other paint brands didn’t fit in unless I gouged them out of their pots.

I went back to my art school roots and had a small black artists toolbox with everything, then when I was doing a lot of big mad music festivals,  a larger upright toolbox with wheels. I rightly thought that would be tougher than the arty ones, it wheeled OK across endless fields and didn’t take up too much floor-room in a tent. 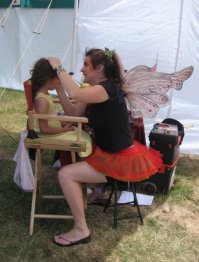 For bookings in New Zealand I cut right down to a small packable kit. 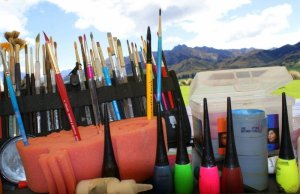 Living on a catamaran in Hong Kong, relying on boats, buses and taxis and no lifts in buildings,  I learnt I had to be minimal. I reduced down to 2 laptop sized inserts in a ‘clamshell’ lidded palette box, which was carried in a rucksack or shopping trolley with all the other bits. I had a good look at the pull-about makeup kits a lot of makeup artists there had. A waste of time, too small, the larger were too heavy, too complicated, not sturdy enough and really only any use in nice flat makeup studios. 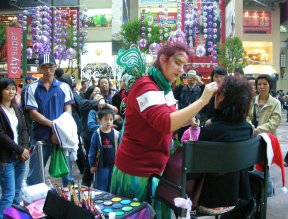 When we emigrated back to the UK, I switched to a bigger handled bigger wheeled much larger ‘trunk’ toolbox . This was fab for trundling through the Norfolk woodland theme park to my daily painty gig for several years at Bewilderwood, as originally they only gave me a platform with a dodgy parasol to work under. So everything had to be sturdy and very waterproof for the British weather all year – I could stuff everything back in it fairly fast if it rained. (Not always fast enough). I still have this, it stores all my acrylic craft paints & brushes I use  when I am doing murals and urban art statues. It is fab as I can stand or sit on it to reach higher. 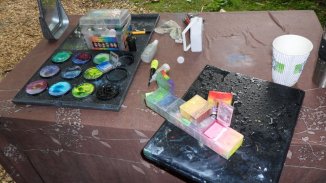 Bewilderwood then built my a stunning painting treehouse, in keeping with the rest of the park, but with a tiny shelf to paint on – I was in the middle with 2 stencillers and a till on either side, so I really had to downsize again.

Eventually I upgraded to a ‘DJ Hero’ Case which was a style I liked better as you could more or less open the lid and be ready to paint. However the legs were rubbish, and had to be carried separately, it was heavy and awkward to carry, and quite flimsy as it was just cardboard walls (not waterproof either). 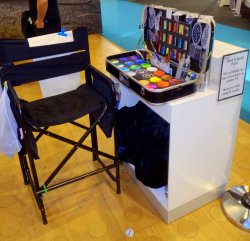 I then converted a golf flight case which was even heavier but I also magnetised that so paints etc with magnets taped on would stick and not slide about. I liked that idea but never did have the tools to attach a salvaged suitcase extending handle, or wheels.

Eventually I bit the bullet and imported a Craft N Go, the smaller paint station specially designed with painters in mind. It’s not perfect – the handle even with the extension is a bit short for me (I’m fairly tall) and I would prefer a stiff extending handle. The attached legs are still a little wibbly if bumped, but its pretty darn good. Tough shell (I went for black as most corporate gigs ask for all black setups), OK wheels (not much ground clearance for gravel/ field gigs, but I tend to stick it all in a big trolley anyway), magnetised base and inner lid.

I’v had it for several years now and its seen a lot of use at my own bookings and demos as well as being the test kit for the Paintopia shop at events. The inner lid metal was stained – I’ve tried various cleaners and even  isopropyl but no joy. Its had mirror acrylic etc magnetized on at various points but now I wanted a change. The black gloss sticky backed vinyl on the base boards was also stained and a bit nicked and dinged. 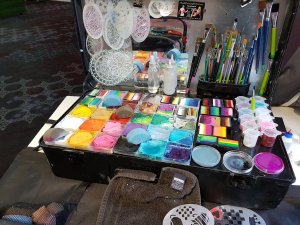 I’m doing much less work abroad now the kids are older, so I also wanted to go back to single colours in the palette inserts (minus the lidded palette box) rather than repotted doubled up paints in a tray, its easier to keep track of the dates and batch numbers of the paints for insurance purposes when they are in their original pots anyway . (But do take a photo of the base and note the date you started the paint as some labels do get worn away!).