I was able to attend the annual Paradise Wildlife Face Painting Jam, which this year had a ‘Once Upon A time’ theme. Organiser Juliet Eve asked if I’d do a freehand glitter tattoo demo, and I decided the demo could be part of a bodypaint I did there. AND there was a head-piece competition so I thought I’d enter that at the same time.

I always like to push myself to try new things, and immediately thought; story books – writing on skin! I hated graphics (the lettering side) when I was at college and have rarely seen well-executed wording on faces so tried to work out how to do that. I didn’t have the time or skills as yet (I really need to do a hairdressing course!) so was also trying to think what I could put on my models’ hair to go with the theme. Then I suddenly thought  – a paper wig! 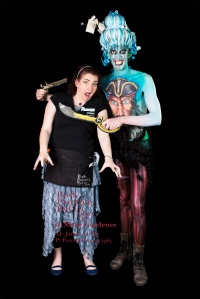 The last #paperwig I made was in 2014 for the Paintopia Professor’s Apprentice Competition in which Nicky Gardener & I placed 2nd. That theme was Vintage Children’s books – not dissimilar – and we chose Treasure Island. I’d designed a wig made from paper quilling strips, which on the day it turned out we had to slice open, as our model was sick and she was replaced by the much larger James. Who rocked it and completed our awesome team!

Anyway, I decided this time vintage paper would look best, and bought some post-war story books from a charity shop. Lots of slicing later I had a sort of Rapunzel wig.  I made lots of paper flowers on my crciut to adorn it, a bit like the Tangled Princess look. 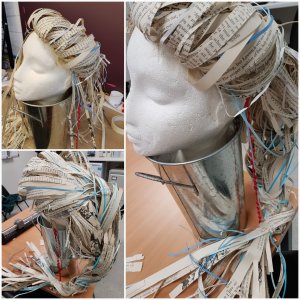 I’m now designing and making stencils (and can do custom stencils too) which Jennie planned to launch as #CutByCat at the Jam as part of her Paintopia Face & Body Painting Supplies shop. So, I made a bunch of custom stencils of fairytale phrases, and also cut them out of glitter card to form part of the wig, and a crown on Izabella.

Izabella was free to be my model, and kindly said she’d meet us there Monday morning. My mum agreed to wrangle my 2 boys at the Paradise Wildlife Park (a zoo that hosts the event) so we drove down through snowy gales the night before to meet up with Paintopia Jenn in nearby hotel. I did try to start assembling my wig  before bed, but luckily realised I actually had to have it bare so I could firmly attach it to Iz’s hair before I assembled all the other bits! Euan refused to let Jennie leave our room, so with that and loud music from other rooms it was a loooong night…

The snow had stopped but we collected a very chilly Iz from the station before arriving at the bright but freezing marquee that always contains the Jam. After greeting lots of familiar faces, I set up and started getting the paper wig onto Izabela. It was shallower than my previous attempt (I’d built up the bouffant bit of the ships figurehead wig with plastic bags which I guess we just ripped out to fit James’ head). Luckily, all the paper flowers I had made to decorate the Rapunzel paper plait filled in the forhead space perfectly. 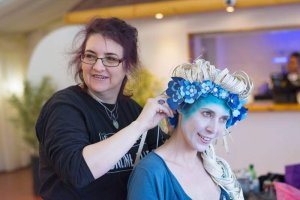 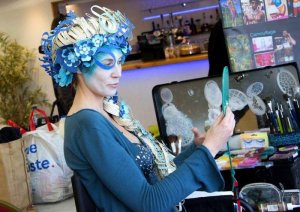 Arranging and attaching all the glittery words took a lot longer than I expected, plus I was chatting and answering questions, so by the time the judging for the headpiece competition started I’d only managed a hint of colour over the white base on Izabella. We were really happy to place 2nd and win some fantastic brushes from the Bodycraft Festival team, thanks so much!

Suzanna Forrister-Beer had the most amazing prosthetic Special FX horns on her husband and came first, just beautiful. Also lovely was the kids entertainment, my youngest was boogying on down…

I continued adding mainly Cameleon Bodypaint from the Paintopia shop, layering lettering and stencils and blending with Kryolan powders. I stuck to white, blues and black as I wanted an almost monochrome book-like feel to it.

Last of all I added some quick hand painted swirls, then some freehand glitter tattoos using the waterbased Mouldlife Aquafix in the bottles with fine tips I sell. Finishing touches were flat backed pearls and tiny accent flowers from Hobbycraft.

And finally the image in my head of Izabella peerg throught the ‘O’ on Once Upon A time was out in reality.

Paintopia Jenn put together a fab vlog on it too.

(Yes my hair is a mess I kept stuffing on a hat when going out to check my snowy kids!)

Huge thanks to all involved, the organisers and everyone who came to talk to me or shop with Paintopia. I had a great time chatting (though not as much chat as usual as I was full of cold) and my family loved the zoo and entertainment as usual!

My final clip of Izabella is here: