This was an interesting booking that Juliet Eve contacted me with. The client wanted 4  models blended into 4 different rooms of a house. We discussed how this would be done and what problems usually arose, and they later got back with 4 samples of the walls we would have. 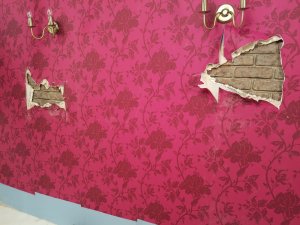 The pinky-purple wallpaper was OK, the bathroom a bit fiddly due to the tiling, the kitchen a headache as it was so plain and unforgiving; the brick garage wall of course is a popular /favourite paint.

They wanted all of this in one day using only 2 models which was a big restriction; this is the most time consuming and technical kind of bodypaint.  The client decided that shoulders up for the female model would solve any problems with what breast covers to use and offending anyone, and waist up for the male. This also helped with time constraints as it cut down the area we had to paint. Still, we had only a few hours per wall if all went to plan. 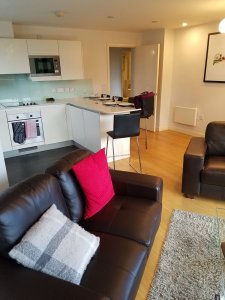 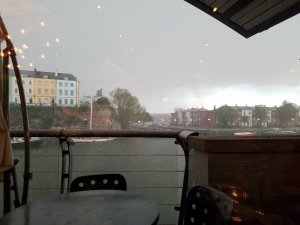 As we had a very early call-time, we were put up in a lovely apartment in the centre of Bristol even though I live about 45 minutes away. Juliet arranged to meet old friends of hers she sees whenever she visits the west, and we had a lovely meal with a freakily heavy snow and hail shower in the middle of it, next to the Thekla floating ship nightclub where I spent many rock club visits when I had my first job in Bristol painting coats of arms back in the ’90s.

The adverts were being shot for a building company called Siniat, who were highlighting different types of plasterboard that can solve various normal household problems – cold rooms, damp or mouldy rooms, noisy neighbours etc.

We used all Cameleon paints with Mouldlife Aquafix and facade glitters for the bathroom tiles.

We were all set up in the studio waiting for our first model to shave after someone went on an emergency shaving shop (he’d not realised he couldn’t have a hairy chest), chatting to the lovely crew and enjoying the largest bacon butty breakfast ever (did me for 3 meals!). 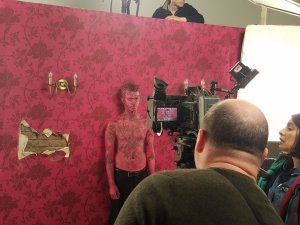 Then we started with the pink/ purple wallpaper covering a wall with noise issues. The shade we could match easily on a flat surface, but humans are not flat and we ended up ‘anti-contouring or ‘non-touring’ with 6 different shades to try to vanish model Ed Loboda into the backdrop. Then we started adding in the swirls of plant/ flowers. 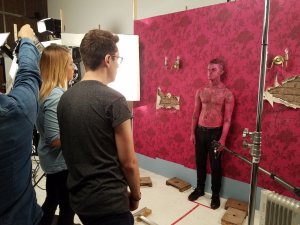 As Juliet finished that look on Ed and waited to do touch-ups and corrections as the cameras started rolling, I was basing out Alice Offley as a damp bathroom wall. 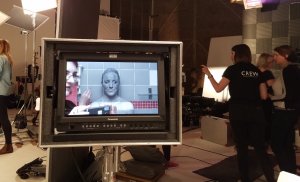 The shapes I had to draw on her to make it look like she was tiled were really surprising, no matter how often I do it – random curving blobby lines with spikes and protrusions look like a straight flat line on camera. Juliet came over to help glitter the pink tiles etc as we rushed to finish that look on time.

As soon as Ed was back from showering and had some lunch and a break, we started painting him as a slightly mouldy kitchen wall. The pale pastel duck egg painted wall was very unforgiving, and the slightly bevelled slightly shiny tiles were difficult even after their set designer dulled them down; I had to do many retouches before that worked on camera.

Our last paint, started by Juliet as I stayed with the kitchen cameras, was the cold garage brick wall. I’ve done bricks so many times I knew this would look the best – they are less precise and can have a lot more non-specific patterns and dots that really help hide a body more easily. 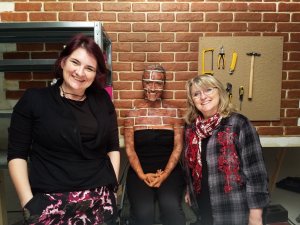 All 4 could have been more ‘invisible’ if we had had more time or more artists per model, or more models each with an artist etc, but within the limits we had – 1.5 artist each look, a couple of hours each look, they really worked and I’m so pleased.

So, a long day for everyone but the clients loved it and the whole crew nailed it. 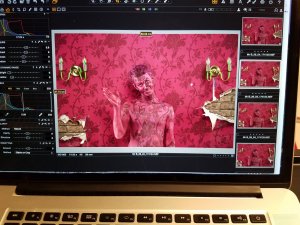