FIP (Face Painting In Progress)  had invited me over to teach at their EU JamVention a few years back which was amazing. Willy & Jacklyn Suiskens, the hosts/ owners were lovely, so I was really excited when they asked if I would be interested in coming to Europe’s biggest Cosplay Event with them and their international team.

I arrived late due to a delayed plane and then train troubles, but was happy to find that although my dutch had vanished (I couldn’t locate my phrase book which I usually read on the plane to get my dutch head on) my school girl german was fine and managed to get me through a few hours of chatting. I knew most of the artists already from various painting events so it was great to see them and meet the ‘new’ ones.

We were all staying in caravans on a huge campsite but were up extremely early so everyone could get showered and ready for the drive.

Elfia Arcen is held at Kasteeltuinen in Holland, http://www.kasteeltuinen.nl/nl/ which is an amazing array of themed gardens set up around a castle and its buildings.

The event itself has 1000’s of people coming along in costumes from scifi films& tv, manga, cartoon, steampunk, victorian, historical… the kids, prams, dogs have outfits too! 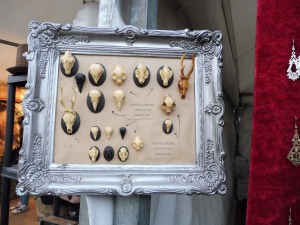 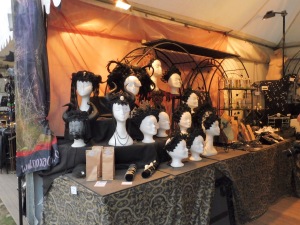 And the musicians and bands! Even the staff and security wore medieval tabards and all the security panels and tape were harlequin too. I was half sad I was painting all day as there was so much to see. 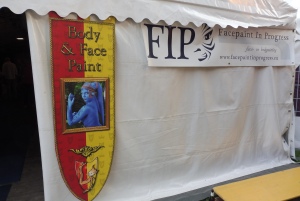 Anyway, on the Saturday we arrived in the lovely FIP marquee as the stalls were opening. The FIP team had a stage at the back with a spacey backdrop as the theme for us this years was ‘Space & Time”. On the left of our main entrance was the brilliant stall Willy had built, selling all sorts of cosmetic props and prosthetics and with the price lists for the face & body painter menu as some of the artists did shifts decorating customers. 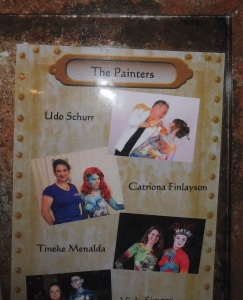 On the right hand side were all the ‘show’ body painters. They had photo banners up outside and inside the tent with the artists names, work and country (I’m Scotland!) on them, as well as a lovely enlarged photo of a favourite paint on each of our tables.

I had Jacklyn Suiskens from Belgium on one side of me,  on the other Udo Schurr of Germany

Saturday I was painting the fabulous Anna and as she liked purple, went for a Nebula-inspired alien. We named her Galaxy Girl rather than Nebula Nymph as there is already a famous Nebula girl in the Guardians of the Galaxy world. I wanted to have her sort of camouflaged and was determined NOT to use black as so many galaxy paints/ makeups are so dark or grimy with black. 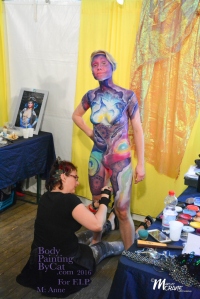 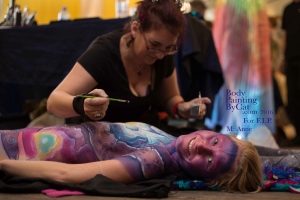 All day we painted, with some breaks and lots of snacks from FIP, as crowds of cosplayers walked past and assorted bands came in to perform on our stage – LOVED the pirates!

As usual when I have no specific plan, Galaxy Girl changed as I painted and became a sort of cracked ‘skin’ like a mandala glittered shell, with a star/ nebula being born from paraben her chest and deep space exposed wherever the skin was ‘broken’.

I used mainly Cameleon, my fave vegan, cruelty & parabene free cosmetic paint, with freehand glitter tattoo over the top using the kids I sell and Facade or Kryolan glitters. I also shaded her face in particular with the Kryolan iridescent powders in silver and purple.

Then there was a display onstage of all the artwork to a packed marquee, 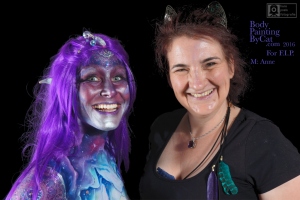 before a quick tidy-up and a few hours following Anna around as she was mobbed by photographers. 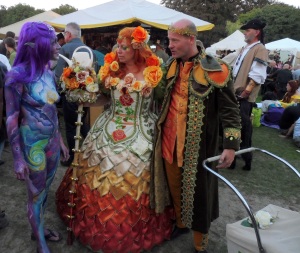 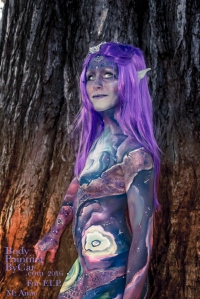 We took some pics in the rose garden area and I was wowed by the ingenious costumes parading by, from Sci Fi and Manga to historical, from Dr Who themed tardis dresses to a girl with a walking centaur. 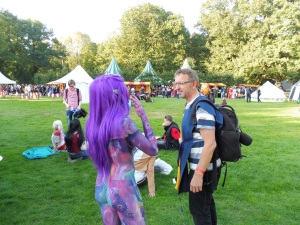 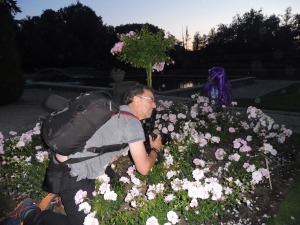