This is the 3rd? time Paintopia has been to Professional Beauty North Manchester, and the 7th? Professional Beauty/ Warpaint Magazine event we have been honoured to work at. It is a huge show full of stalls promoting all sorts of beauty and spa products and courses, from nail art to fake tan, teeth whitening, uniforms and massage. This year it also included a hair expo, all held in the lovely converted Manchester Central convention venue.

I’d changed my mind on the train up so did my usual awful scribble (made worse by the train I say!) to text to Jennie & Grace. They had no idea what I was on about so after my annual cocktail at the PBNorth welcoming party, I sat down slightly tipsy with one of the wipeable bodyboards Jennie & I designed that she sells and painted it properly. 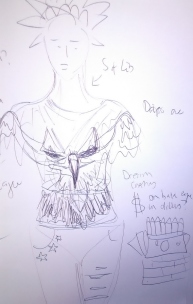 The 2 day event always runs from a Sunday. That first day Jennie & I usually bodypaint a demo model, following the same theme as the competition that we will judge on the Monday. We also do an onstage demo/ workshop. This time as the theme was USA, we decorated Gracie Bodypaint Model as our ‘American Pride’.

I had borrowed the amazing headpiece Jenny Marquis built for Gracie when they came 2nd in the Professional BodyPainter of the Year Category at Paintopia this year (her Gangs of New York paint for Paintopia’s Urban Jungle weekend). 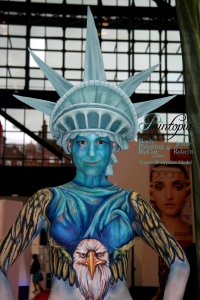 So, we did Gracie’s face and neck as the Statue, mainly in Cameleon Celadon and Inkheart, which Jennie had to spend ages blending whenever I added or changed wrinkles on it. 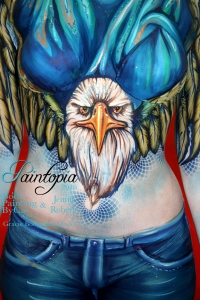 Then I went on with a (very grumpy looking, sorry!) American Bald eagle over her chest. Its feathers I mainly one-stroked with Cameleon “Buzz” colorblock. I stencilled a hint of Native American dreamcatchers behind the eagle to denote the original americans who so revered wildlife. 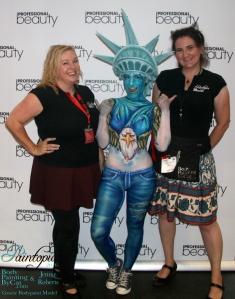 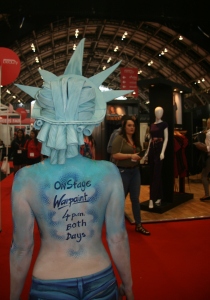 On her lower half we went for a simple but sometimes badly-done and often requested paint; fake jeans. Jenny based in a pearly blue and then one-stroked on seams which I creased, highlighted and shaded. We thought the audience might like to see that as part of our demo, so didn’t finish off the legs to be able to continue them onstage. 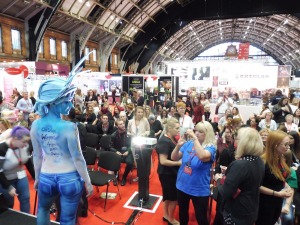 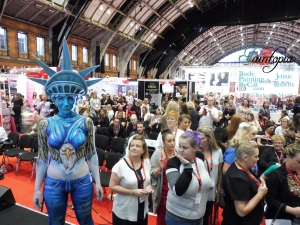 I dyed my finger tips their usual blue by outlining everything in Cameleon Inkheart (my fave bluey-purple) whilst Jennie did clever things with lashes and the headpiece. A quick advert for the bodypaint stage shows on her back, and off we went. Some cabuchons for eagle eyeballs and Kryolan gems for jean-studs, then a few little freehand glitter tattoo highlights using the fine-tipped glue bottles and cosmetic adhesive I sell were the finishing touches.

Onstage I have no recollection of what we talked about; I know I made several ‘rips’ on the jeans to be a bit like the stars & stripes, but we didn’t finish off Gracie’s legs. By the end of our slot  it was getting towards the close of day 1 so we went to get photos in the sales hall and outside. I have to say it is the best reaction to any of our paints we have had. 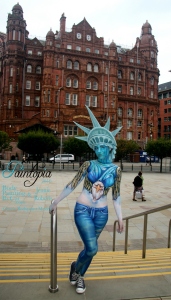 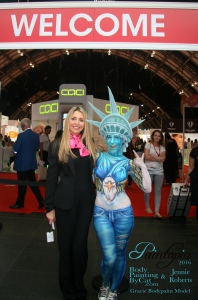 Everyone thought the ‘top’ was fab but didn’t realise the jeans were fake – Gracie had to keep moving the waistband of her knickers to show the paint line. One lady actually welled up which was a first. 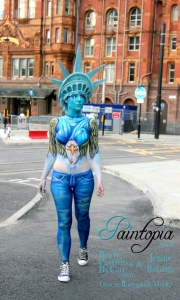 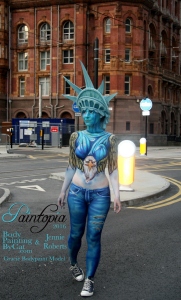 It was also the warmest PBNorth we have been to, so after we packed up Gracie decided to walk back to our Melia Innside hotel in her paint, which gave us some fab photo ops! 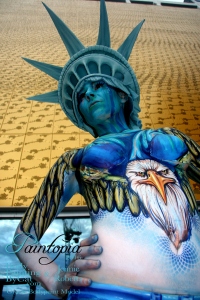 We saw several cars circled back so they could film her, and a coach-load of oriental tourists were overjoyed and waving/ snapping pics like mad.

We headed to a location with interesting architecture we had found last year to get pics, and were lucky enough to be approached by a bunch of Instagram Photographers having a meeting! 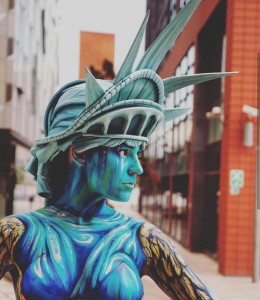 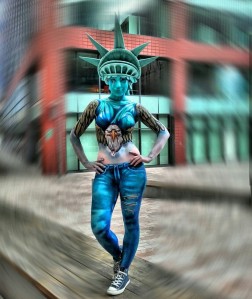 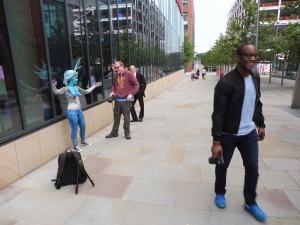 Monday we had an interesting time judging the student  and professional bodypaint categories. We were delighted that out of a large number of other competitors in assorted makeup and special FX genres, our winning Professional Artist, Cheryl Howes, won the overall top Professional award with her elegant Art Deco USA work on Debbie. Plus our winning student Emily Smith won the ‘Rising Star’ award as one to watch! She was amazing and so was her lovely dad who’d let her glue him into a fantastic home-made beak to be a bald eagle as part of her USA paint.

Huge thanks to Emma, Ali and Debs of Warpaint and all the lovely judges, we need to meet up more often!