I’d just moved to Bath (boo – bad timing with Paintopia coming up!) so drove back to Norfolk on Monday night in torrential rain and crashed in Jennies’ office on her very comfy Tim Burton sheets.

The next morning, still in rain, I drove to Kings Lynn to take a booking I’d managed to squeeze in whilst I was up. The WWF-UK had contacted asking if I could create Guido Danielle or Emma Cammack style hand-art on a school they loved working with. 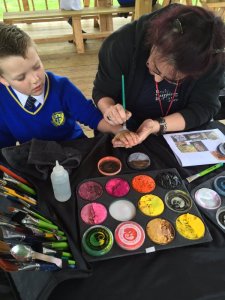 They had hired Anna Lingis to do studio shots of some hand-imals, and I was to do my own launch examples on kids. We agreed on simpler faster designs as I know the exquisite examples they sent me took hours, and didn’t think I or the children would have the patience/ time.

The school was amazing, all decorated throughout with various themes, from Bewilderwood stairs mural to a Hogwarts library – and the headmasters’ hall was entered via a Tardis then became a Dr Who homage! 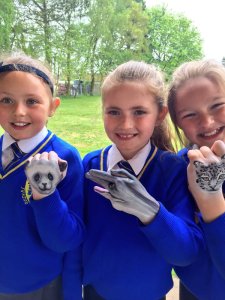 In the hopes it would brighten we decided to set up under their outdoor eco pod, a sort of large wooden open gazebo (sadly it rained harder). I had a small group of Year 3s to decorate and they set to on their ipads (every pupil gets one) to look up images of their favourite animal, preferably from the endangered list WWF-UK had sent. 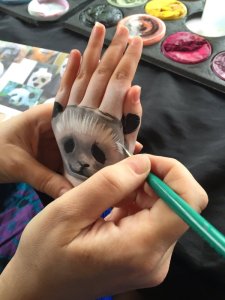 I began with a panda on the back of a hand, and was able to chat about the pandas I saw every week with my youngest son when we lived in Hong Kong and had a season ticket for Ocean Park there. 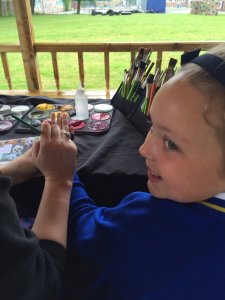 A lot of the time it was so warm that keepers had rigged up ‘refriger-rocks’ that the pandas lay on or hugged to cool off. The kids googled to find out what pandas ate when they couldn’t answer that one.

Next came a snow leopard. 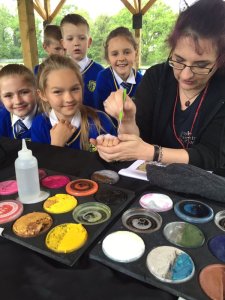 Colin, who was on my Biological Imaging Bsc with me many years ago, became a wildlife film-maker who shot a stunning episode on them, so we chatted about those too. I couldn’t quite recall what eye colour they had& the photos I had varied,  so we went yellowish but now I’m thinking blue…. 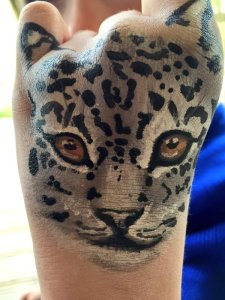 After that I did a mountain gorilla. I knew a bit about them from researching an unused design for the Norwich GoGoGorillas statues I painted for Break Charity/ Wild in Art.

Then a jaguar. I was lucky enough to grow up in Belize near the worlds 1st Jaguar reserve and had read Alan’s book on it. I’ve never seen one wild, just a fresh footprint so new it was still filling with water on a soggy jungle path. 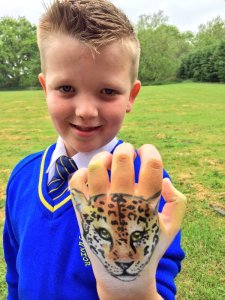 The dolphin was harder; it was an awkward pose to fold in fingers and open the ‘mouth’ but it just about worked. I didn’t want all the pics to be of the back of hands so was trying to be a bit more creative! Again we’d played with wild dolphins in Belize so I could talk about them.

Then I had daft stories about tigers …. 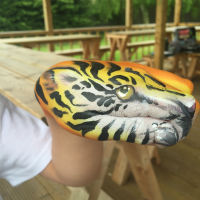 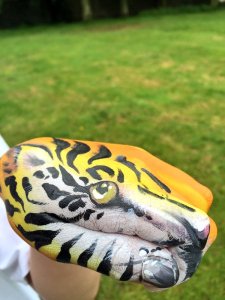 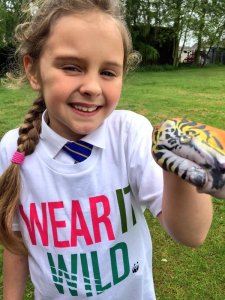 …. and giraffes from when I was the Education officer for Banham Zoo & Africa Alive. 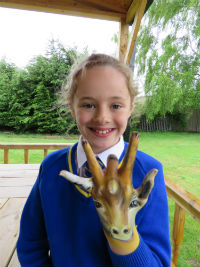 A quick elephant finished off the designs. 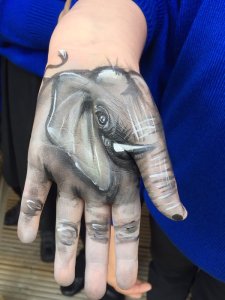 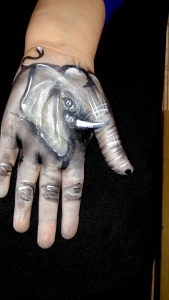 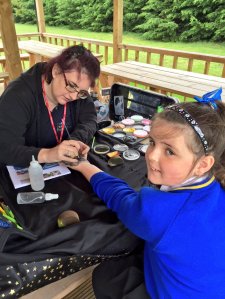 By that time we were all wet and frozen as the weather hadn’t improved, so the kids went off to their late lunch. 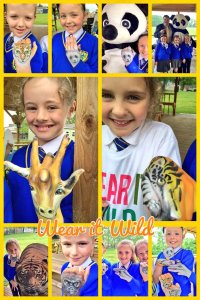 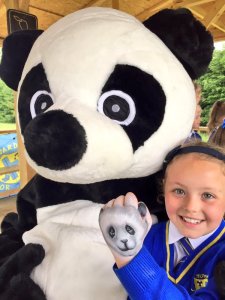 But very happy to do something so creative and fun that would also be used to help save species.

#WearItWild is on Friday 27th May and we’re challenging you to get creative and #GiveAHandToWidlife. 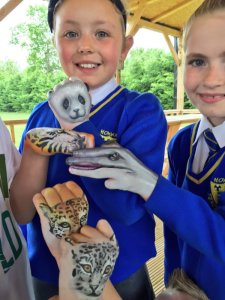 The photos on here were taken by myself, assorted press and the lovely ladies from WWF-UK. 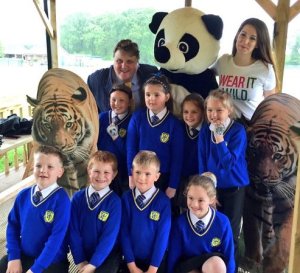