Now, when I started this ‘habit’, like many face painters it was my fun hobby and partially funded by my proper day job (running a Nature Reserve as an Education & Visitor Centre/ SSSI).

This was in the days before Facebook when the internet was quite ‘new’ and only 1 face paint chat-site existed. Libraries only had the terribly basic & dated old books by a certain paint company which did not impress me even as a beginner. Pretty much everything was suck it and see, trial and error….

This kind of advice I don’t mind giving out for free as it saves wasting a lot of money. I plan to do a whole series as I am repeatedly getting asked it and don’t always have time to type huge answers especially on my phone.

I don’t bother going on many of the myriad Facebook pages/ chat-sites now, I find it too annoying that a loud % will ignore or shout down any sensible advise/ experience, and declare that they are right despite never having tried it/ their ideas being downright dangerous. 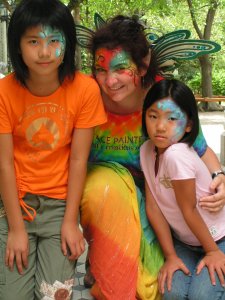 Having always worked for big companies, (the Natural History Museum, 3d Adventure & Education/ Superchoice, The Suffolk Wildlife Trust, etc), I was used to corporate branding, and knew the usefulness of everything being matching and easy to identify. It was also a distraction disguise as a couple of times I had kids who I’d painted at events locally knock on my door asking to be painted, which is not ideal in a child-safety paranoid culture. 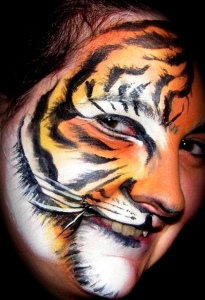 So, as my first big successful face had been a self-painted tiger (as in I face-painted it on myself to transform my own face), I went for orange, black & white as my colours. 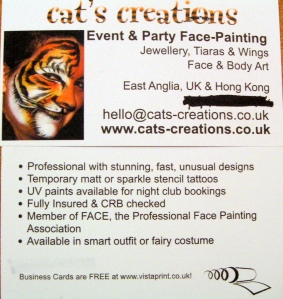 My marvellous best bud Jake of JP74 created a cute ‘cats-creations’ logo for me in tiger stripes. I had an orange folding table, painted picture frames and a stand with tiger patterns to match, and  had black or orange shirts printed up with my logo/ website. I had that photo blown up as a car sticker and orange & black car lettering. And, as at that stage like many beginners I still accepted pay-per-face bookings (where I turn up, charge the public per face and give the organisers a fee), I needed a matching gazebo.

As I worked for a national charity I had already met the wonderful new ‘pop-up’ gazebos that were slowly replacing the old-style slot-in pole ones. So I started researching prices for them.

One of my earliest corporate bookings was painting in a well-known DIY chain. Sadly their colours were orange & black too and I kept getting mistaken for staff! Plus that was the end of my orange T-shirt, I hadn’t realised how badly facepaint stained bright colour shirts before then. Anyway, they had an orange gazebo on sale which I snapped up. 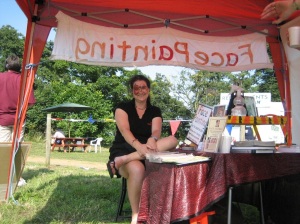 My first day’s work in it showed me how useless it was; I could hardly tell the difference between my colours, and as to blending, I couldn’t see where the colours were on a face let alone blend neatly. (It was also rubbish and broke the 1st time I took it down). 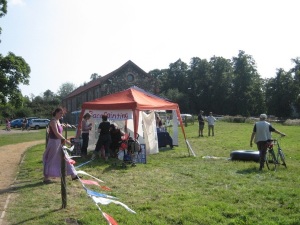 I tried again with the replacement I was given; but no, just look at the tint on my own skin. It did make me start to plan the ergonomic paint layout I now use though, as I realised I had to place paints in a pattern that meant I knew which was which just by where they were, not the colour. That gazebo also broke on 1st take-down so they gave me a green one. Don’t ask – all kids looked like sick zombies in that light even when they were butterflies etc.  And it buckled the 2nd time I was putting it up. I even tried a clear ‘greenhouse’ for night-time outdoor bookings – not good for shade of course, and smelly! 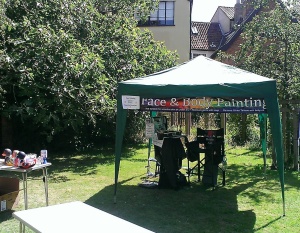 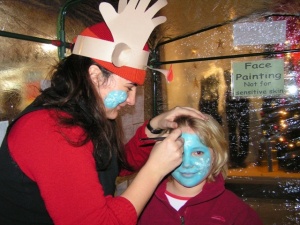 Work then invested in their own navy and blue popup gazebos, which taught me those colours were no good to paint/ photo under either… soooooo what to look for? 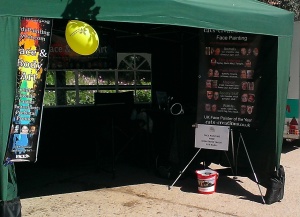 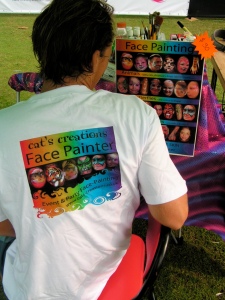 My colour adventures continued in Hong Kong, as you can see, where organiser had to provide me with shade/ shelter as like most I relied on public transport, and HK is not big on wheel-accessibility either. This is the ‘whitest’ I could get a photo under a green tent and its still not quite right.

After trying a 4 different cream or white popups from various places (1 wouldn’t open when it arrived and the other snapped a pole the first weekend), I listened to my dad ‘always get the best you can afford’ and invested in an expensive professional white one from GalaTents. It was much heavier, much stronger and I could JUST put it up on my own. But it was quality! 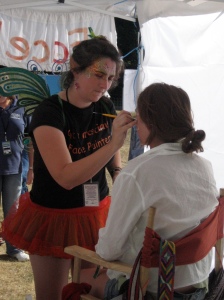 It was brilliant – in the end that did me for 4 years of bookings and then was borrowed by family when we emigrated to Hong Kong. I hear it stayed up year round for a while, in windy Norfolk, had lots of use for 2 more years and it was up for a year covering our woodpile when we moved back. Finally a storm flipped it 2 years ago when it was in our garden; the frame was fine but it needed a new canopy. Definitely buy the decent stuff!!! Or get clients to put up a luxury one like this… 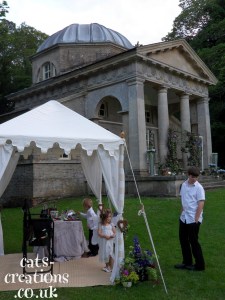 However, if you go to any festival/ event, 99% of the tents will be white. And the whites/ cream does get so grubby so fast and isn’t that easy to wash. Ditto any mould stains – very visible.

I then spent 4+ year painting daily, full-time, at a Norfolk visitor attraction. 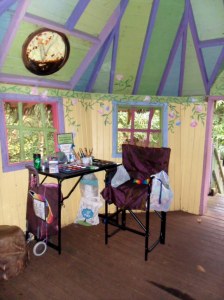 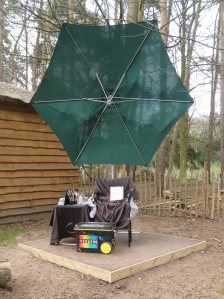 They went from having me in a treehouse (where many people with kids couldn’t get to me as had buggies – plus do you realise how much big trees sway? Like boats!), 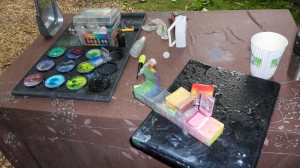 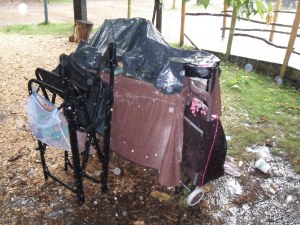 to having me under a large green umbrella (wet & windy) 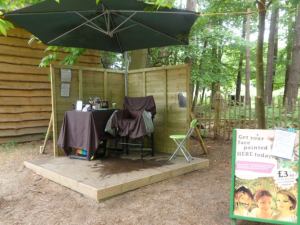 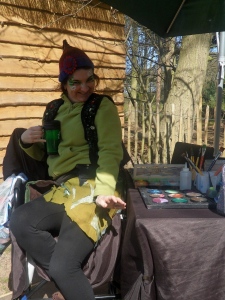 to giving me shelter walls, then finally, a marvellous, lit, round-a-tree-house with electricity. Still a bit breezy but my fave ‘gazebo’ so far… 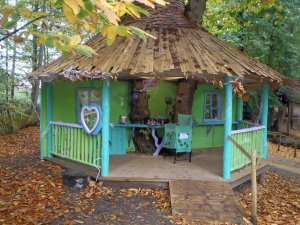 I’d love to get a custom coloured tent, or striped, or anything with a random colour mix but those are outside my budget especially now I rely solely on face & body art for my income. 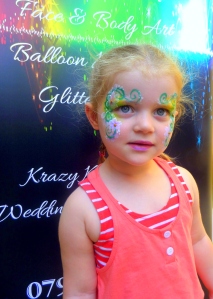 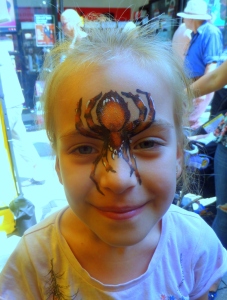 I was then booked by KJ Entertainments to paint alongside her which was fab. I arrived to find they had put up a bright yellow tent and winced. KJ saw and said she knew, she’d had a moment of madness/ forgetfulness when replacing their kit that year and was really regretting it. 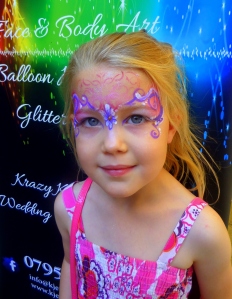 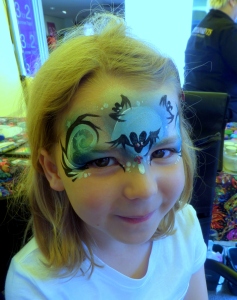 Everyone had jaundiced skin even when the sun wasn’t out and we had to take photos outside not under the canopy if we wanted them to look normal, even photoshop didn’t help that much. Spot the diff in the 4 faces- 2 inside, tried to correct with much computer fiddling, 2 outside…

Looking through my archives I realise that even though I did use take a photo of every face (I had my 1st digital camera!  – & wanted to be able to email them to clients, have them to see what to practice/ change etc), I deleted nearly all of them as the colours would not go back to reality under the tinted light….

It was KJ who put me onto black as the colour of choice, she was going back to that with her next tent.

So, I tried a smaller black tent. Until now I’d had 3mx3m gazebos, which TBH was more space than i needed and cost more at events charging by size of pitch. I found a 2.5 m (cheapie) popup in black on Ebay and thought I’d try it. KJ was right – its great to paint in. 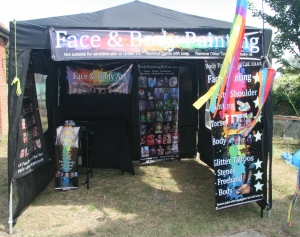 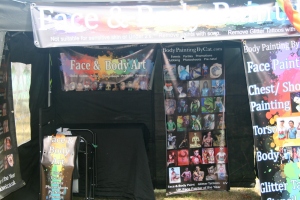 So far it has done multiple VW festivals (most in mud & rain, 1 in a scorching hot dry & dusty range of fields), massive music festivals and several smaller occasions. 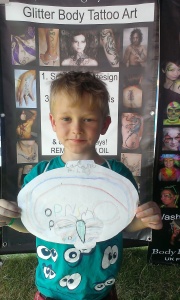 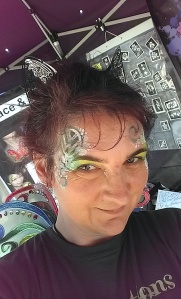 It didn’t feel too hot inside and many commented on the coolness of its shade at the dusty week, whilst I painted with the sides rolled 1/2 down watching the white tents around me turn brown with the dust. Mine stayed looking smart and still stood out from the pale crowd. 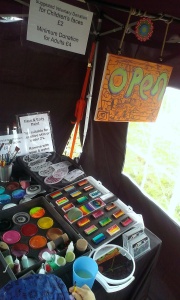 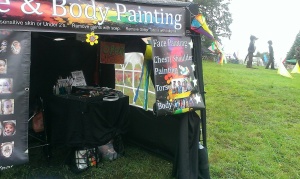 The big Beautiful Days fest was a total washout with torrential rain and much mud; we actually squished in 3 painters as the other one bringing a gazebo couldn’t make it in the end, on a 2 way slope, not an ideal pitch!

But even in horrible weather we could see to paint apart from when big thunder clouds had people switching on head torches- but that wasn’t just in our tent, they put on the ‘street’ lighting too as it was so dim!

Sooooo, although there are a huge range of colours now available in a huge range of popups now, listen to the old hands; unless you invest in some lighting systems (more expense & awkward to get charge/ power plus some fest won’t let none PAT tested things be plugged in, etc); unless you are an excellent photoshopper/ don’t take pics, painting in most coloured gazebos is difficult and most photos will be useless.

Stick to white, cream or (my personal fave), smart dirt-hiding black! And go for the most professional-weight one you can – it lasts longer (many of the cheapies don’t last 2 trips out),and  it is heavier so less likely to flip (I have seen that happen a lot).

Tip: DO Invest in at least heavy-duty tie-down kit & leg weights, either the bags that hold litre bottles per leg (I get cheap spring water/ soft drinks & drink them through the event, replace with non-drinking water if that is all that is available), or the screw-together plastic ones that hold water/ sand. Etc. Many events now insist/ check your gazebo is properly secured, there have been too many accidents/ scares with gazebos taking off ( I have seen it many times, not fun). the flimsy cords most come with are like tooth-floss holding back an elephant and pointless. I have changed the thin lines with stronger UV/ day-glo cords too as well as weights and tie-down straps, with heavy duty ‘screw-in’ ground pegs. All helps! 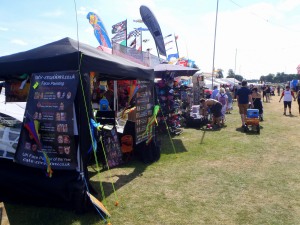 Tip: if its hot & you want a breeze, don’t waste time, money & weight getting those expensive ‘half-side shop-counter’ panels with a horizontal bar at waist height.

Gives you the breeze but still stops people wandering through/ gives your kit more protection etc. The velcro on the back/ other walls holds it up in place high enough.