This was an idea I had had for ages, inspired by all the (slightly cheesy) american adverts selling cooking products. I could see really bright, perky colours in a polka-dot kitchen.

I’d immediately thought of Ginger Koneko as she’s such fun to paint, and has a naturally classic look even before she does her fab vintage hair and makeup. Luckily she agreed.

Then it all went a bit pear-shaped. We tend to do shoots at mine as I have space, but sadly my son caught chicken pox and Sean the photographer had a young baby….. Luckily after professional advice from Ginger (a nurse), we decided it was OK to go ahead. Ginger even arrived with some of her gorgeous cakes (she also runs a fabulous cookery website, SheBlends ) and had decorated one with red M&M’s especially for Fin to match his spots!

I mapped out the design (a simple cropped pedal pusher, apron and shirt) and we started filling in the body paint with kabukis. We only use Cameleon body paint for these shoots – I love the bright colours and how easy it is to blend – and how durable it is. 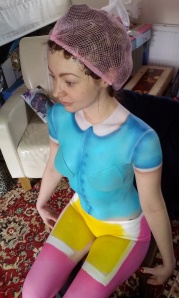 Jenny then went on to stencilling the lacy pattern onto the apron (using the same stencil as for the chintz flag shoot for some continuity) as I began outlining and shading. The polka dots I added with a big sponge dotter. 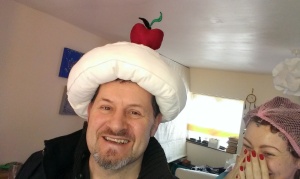 Around then Mik and his wife Tina arrived to drop off a very important prop. Tina had sewn an amazing ‘hat’ for Al (the Financial director) who was also to have a role in the shoot. 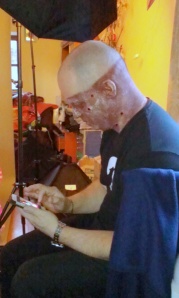 We finished up, had a massive lunch (and some of Jude’s cakes) and set up for the shoot. 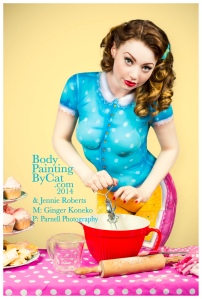 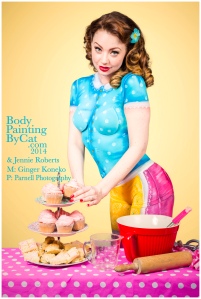 As you can see we almost shot a story… Jude mixing and making her cakes, decorating them, and then the surprise ‘cake’. 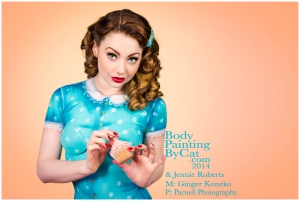 We’d done some with her pouring flour/ icing sugar over Al’s head. Then we thought we should really pour a liquid… and recalled a pack of custard in the fridge. 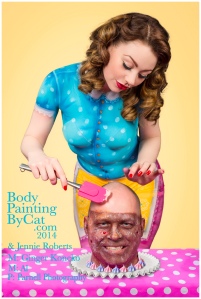 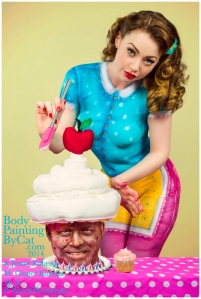 Al said OK and so Jude was pouring the packet over his head! When I can get hold of the video I shot it WILL be going up – he was a trouper and smiled as it dripped all over him.

Illusion Magazine ended up choosing this as the cover (AND back) shot for the Paintopia 2014 brochure. 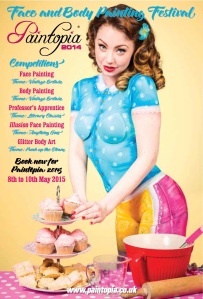 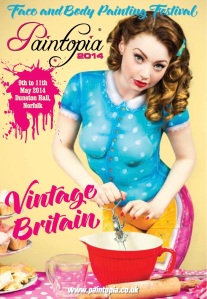 LOVED this and Sean Parnell’s photography is just perfect. Its rare for me to have such a clear idea in my head to paint…. and then having it shot so exactly as I imagined it – happy place! Thanks so much everyone involved x