This was another painty break helping to distract from a sad event for me – my beloved Highland Granny had passed away the week before and the funeral was on the Monday after Phizzog. This was the event that I won (thanks Laurence and Jade, my models for the 2-day event) last time, organised by the lovely Carrie Hoyle and her family. 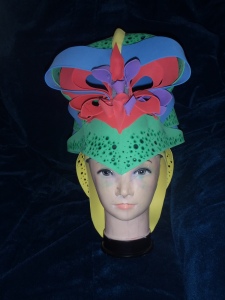 I’d already booked a hotel for the weekend, food, party night and model as well as spent a week making a ‘hat’ so decided I was going to go after all. I did have to cancel the workshops I was supposed to teach on the Sunday as I’d be leaving early, but that was OK luckily. 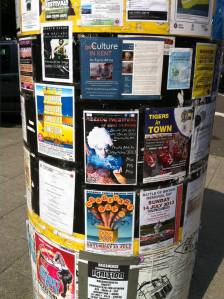 The theme given was ‘B Movies’ and I actually did try to watch a few as they aren’t my favourite thing! I eventually decided to think laterally and amalgamate many of the factors that made a warrior in them to create the Ultimate ‘B Movie Hero’. 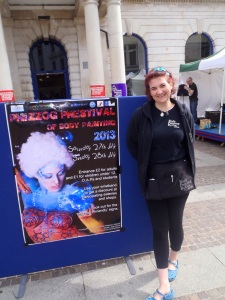 The drive down from Norfolk on friday night wasn’t as awful as last time (not quite so many jams!) although it was so hot I was watching the engine gauge, but it did take over an hour to find parking and even then I had to get up early to move my car twice before I found somewhere I could just pay enough to leave it all day. 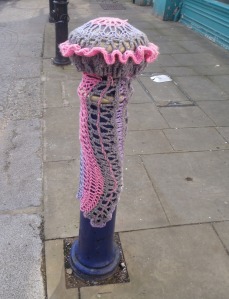 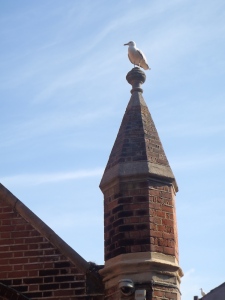 By then it was late so I spent a few hours wandering Folkestone (some very cute retro bits- with knit-bombed bollards that looked like fluffy jellyfish as well as some iffy back streets) trying to find anywhere to park or at least be able to drop off stuff the following morning. Sadly all locations remotely close to the Town Hall were a few hours stay only. Rather fab to see my winning paint from the previous Phestival (the Folkestone Rocks one on Jade) as posters of all sizes! After meeting and chatting to fellow painter Fran in the hotel, we decided we’d have to lug our kit on foot rather than risk tickets and having to leave to re-park every few hours:/ 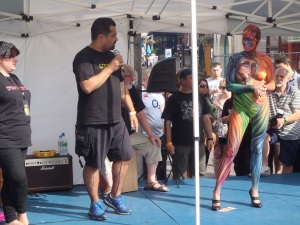 Typically it was spitting the next morning, so we eventually arrived, very hot and damp, with aching shoulders, to set up. Alex Hansen was there to do an exhibition paint, and super cheery, and as I started unpacking lots of familiar faces arrived. It was great to see Michael of Fantasy World Wide (who organised the amazing Shanghai International Body Paint event back in 2009 that I was lucky enough to take part in) too. 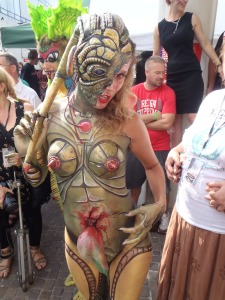 The yummy YC Art Yvonne and Gareth were over from Holland, and created the most brilliantly horrible alien birth body that actually popped and oozed as it happened! 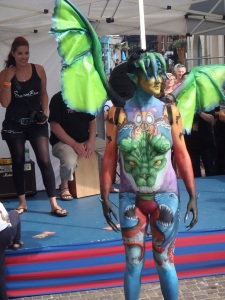 Sabine and her husband Mario (who she met at Micheal’s Shanghai event) had crossed the Channel too, and her paint was killer. 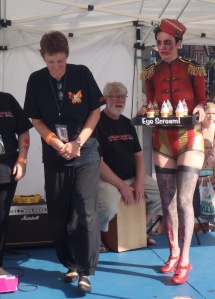 I got my hugs in with Eugenie and her family, the Cameleon paint crew, who were making us all dribble at the stunning steam punk paint display Alex had made her. Whoa! 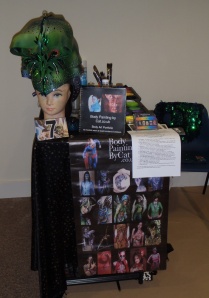 The hugely tall and very sweet Will Shave had offered to paint for me and arrived reeling after what sounded like a bad night of little sleep. Fran was painting his girlfriend Claire (they were 2nd & 3rd at Art Couture Painswick when I won, and I first met them when they first met at the Welsh meet-up where I painted the Snow Queen on Fern). I must admit that most guys I paint are smaller in height than Laurence and wow I noticed the difference on Will – extra long time needed to paint all the extra skin:) He was a total trooper despite his eyes slowly turning red! 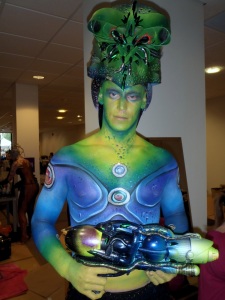 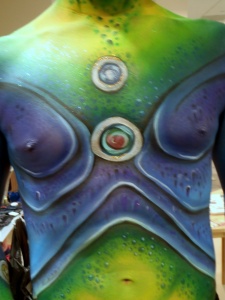 I used all Cameleon paints again but didn’t quite manage the effect I wanted of bright, chitinous (the stuff beetle wings are made of) armour – I will have another go another time. Will’s Hero had ‘panic buttons’ all over him of things he could smash to release when he needed them – love, holy water for vampires, cold and other disease virii for invading Tripod Aliens, ice for the Blob, sound for exposed-brained Marsian attacks, etc. 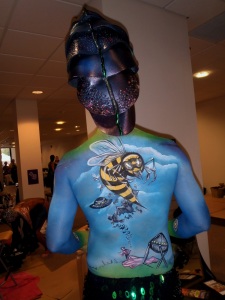 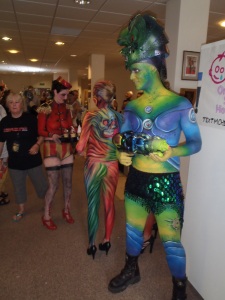 His height, stacked boots and enormous fake alien head made him look huge and intimidating to any monster, a defence in itself. He had ports for weapons and missiles to emerge from– and a giant water gun I’d blinged up to be a mega-gun. He also had cyborgy computer interfaces to release computer virus’s. 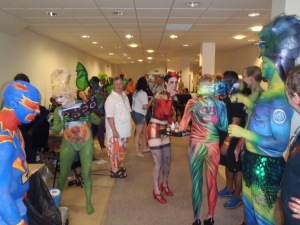 On his back he had a sort of ‘kill list’ recording various species he’d overcome, e.g. zombies, tripods, vampire bats and a a giant wasp with huge crystal eyes. 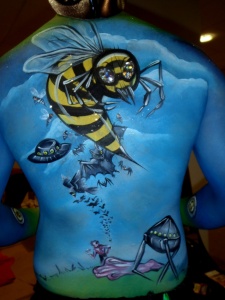 The mayor and members of the public were wandering in to see us, and at the ned we all trooped out to explain our designs on a small stage set up outside the hall. One (drunk?) passerby shouted out some rude comments about one model’s lovely chest and suddenly found all of us and a large crowd turning to glare at him and slunk off sharpish! Of course Will was too tall to fit onto the stage in his gear:) 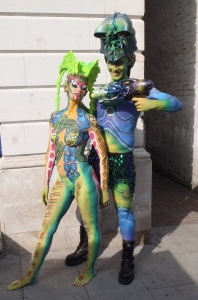 That night most of us met up at the harbour for a meal/ party but typically a massive storm was brewing. Carrie had organised a more sheltered location (shame as the little cafe deck over the harbour edge was stunning) and we just managed to dive into the ice cream parlour cafe before the heavens opened – impressive lightning! Carrie had on a B Movie-print Rockabilly dress I lusted after. Most of us were tired and a bit painty so Yvonne & Gareth kindly stuffed their van with dozy painters to save us the trek back up the hill, and we all tried to sleep. 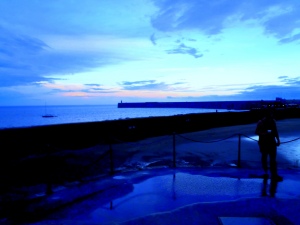 The next morning various workshops and paints were happening; but I left just before lunch the next day, for a mega drive back home (6+ hours) after which I collected my hubby & son for another 10.5 hour drive up to my Grans’ in the highlands. The funeral was lovely and so was the weather, despite a downpour at the end of the wake. Then poor Pete had to drive us all the way back down to Norfolk as he’d only got 1 day off work!

A lovely surprise was Will phoning to say we had come 3rd at Phizzog, and he’d collected the rather fab trophy Carrie had made as well as some Cameleon prize goodies. As usual, thankyou so much everyone involved, you do keep me happy!

Apologies for my rubbish snaps  -I’m hoping Simon Smith took some better ones!