I heard that there was to be another WildinArt event in Norwich – I missed the first, the elephants, as I was living in Hong Kong. Firms could sponsor a statues, pick a design or artist and have their details on display around the city all summer, after which the gorillas would be auctioned off for the charities. I entered a couple of designs and was overjoyed when the ladies of Jungle PR chose my ‘Urban Jungle’ from 100s of entries. I have enjoyed working with them before, so was happy to be the 1st artists in the empty shop we had as a studio in Castle Mall working on a statue. 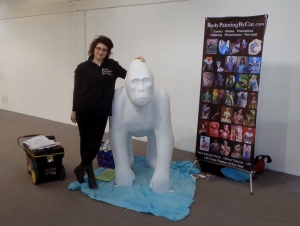 Bigger than I expected – and I hear real gorillas may be larger! In all my Natural History Museum/ Zoo education career/ travels I didn’t actually meet a live one so I wouldn’t know… They came ‘undercoated’ in white, so I invested in a lot of decent acrylic paint and got started.

The idea was that although the project was to raise funds for BREAK Charity AND the Born Free Foundation, I could highlight the difficulties local urban wildlife had. Lots of easily identified animals (fox, robin, hedgehog) were painted on, peeping out of an untidy garden as that’s the best for wildlife. 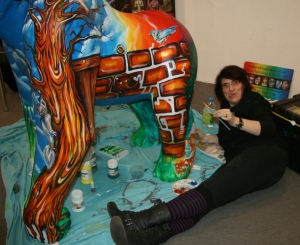 Norwich cathedral’s tower with its falcons was shown, as was a thrush on a wall with a glittered snail trail leading down the brickwork as a maze for kids to let any snails escape into (or be caught from!). And the famed starling swirls of Suffolk (which I often saw when working for Suffolk Wildlife Trust). 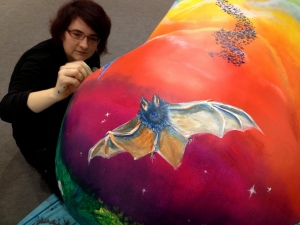 There were bees & ladybirds to ‘spot’, a tree with a sleepy owl and cheeky squirrel, and a small pond full of frogs and newts etc. A rainbow sunset down the back darkened to a bat in an evening sky. Scattered along the sides were hints on things to encourage those species into your urban area – bug homes, pots for hedgehogs, flowers, plants and food they like… 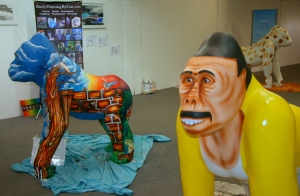 It was lovely to see the other artists arrive and start work too. Mik Richardson is the expert guru on these statues and is now a great friend. His Radio Gogo Freddie Mercury was stunning and did not deserve the ridiculous removal- he had to re-paint the face after it went out in public, as a hairy gorilla, after the Freddy Mercury lot objected. Insane. And then someone from Queen made totally wrong comments about Mik

He had the best result – Freddie went for about triple of any other price at the auction – £20,000 for the charities!

it took a lot longer than I expected- over a week of 8+ hour days! I’m used to painting on curves at awkward angles from my body work, but I reckon just the head and front legs of the gorilla has about as much surface area as an average body model! 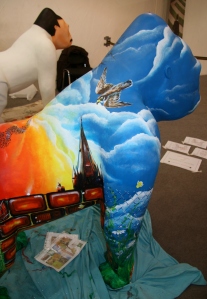 It’s a nice change to have done something that was varnished on and will last a bit longer than my usual ephemeral stuff!

The statues were taken off to have those code square weblink things attached to them with the artist and sponsor details on plaques, and then lorried to their locations. Jungle Jim was on Fyes Bridge in Norwich;  for months I had photos tagged to me on my Facebook page of people cuddling him, riding him, even a bridal party around him! Sadly I’ve lost them all after I was banned from Facebook (for unsafe photos even though I don’t paint nudes and the ‘final straw’ banned photo was of a face painted fairy! Its vindictive and has been happening to body artists worldwide:/)

Sadly he was quite gouged and bashed up from people sliding on and off him – even a hole in him under the owl, which isn’t easy to do, so i had to do a fair bit of touching up before the auction. 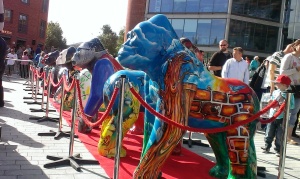