Jennie fancied another paint to use for Paintopia, one we could launch earlier to promote ticket sales for the public open day. 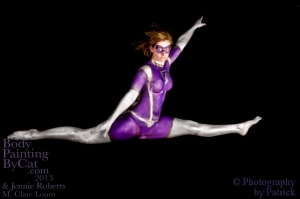 As we’d done a Sci-Fi alien, we thought a Superhero was needed. So, retro-style (slightly Incredibles-inspired) Paintopia Girl it was. Jennie was using purple for her fonts (and hair) so that decided the colours, plus she’d got a new Superstar purple paint to try, and I had their glittery silver unused as yet. 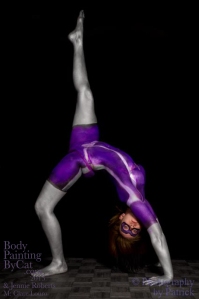 I thought that Bendy Claire from an earlier shoot would be amazing, if we could get her in ‘super’ poses captured by Patrick’s fab camera skills. 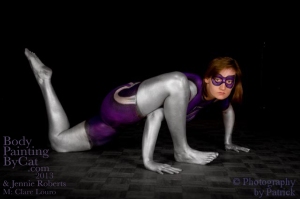 They were both up for it so we met in Horning Village hall (2 mins walk from mine, as I was preg and not allowed to drive). The paint was fairly fast, blocking in the purple and silver and then shading/ texturing with stencils in black. 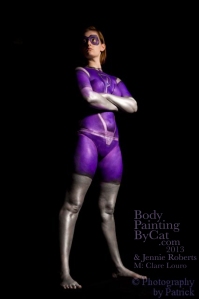 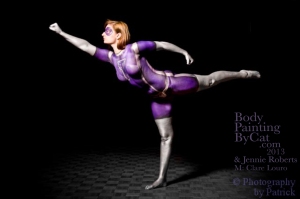 I was quite annoyed by the Superstar paint – before the paintwork was finished (under 2 hours) it was noticeably rubbing off – even Clare commented as she’s been painted a few times before and noticed. 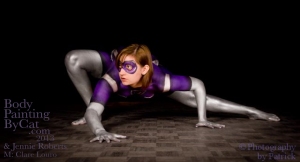 When she actually started posing it was even worse – the paint come off her onto the floor, other parts of her, etc. And I am still getting the glittery silver dust out of those brushes, it seems to reappear however much I wash them! Clare also had an issue with staining – I’m fairly sure it isn’t any purple that stains her as last time I painted her pink and purple and silver from other brands. But this time she had a purple suit lingering for several day, ah well! So I won’t be recommending Superstar silver or purple I’m afraid…. 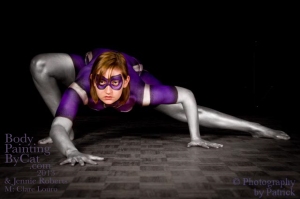 Anyway here she is as Paintopia Girl:) 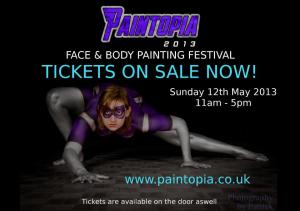