I’ve been lucky enough to get asked to teach and/ or demo at this convention every year for Rosie (not that I have always been able to go – babies, living in Hong Kong etc), since I won it in 2007 with my Jungle-themed Tree Frog paint.

This year was the 1st time I went with a buddy – my lovely Jennie Roberts of Paintopia. As usual we blathered non-stop on the way to my dad’s hotel (The Garden House Hotel, Stamford). I had a nasty feeling I was coming down with something and sure enough, had to stop off the next day to stock up with flu pills. 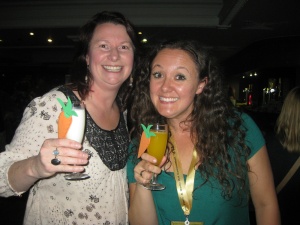 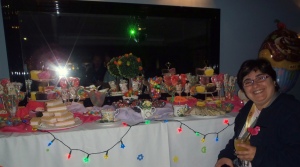 But we kept talking – and arrived at the convention on Thursday with sore throats. Jo called me up to check I was coming to the VIP & instructor opening evening (which I didn’t know about!) so I went along and met the bubbly Margi Kanter of Pick Your Nose face paint book fame. And BecStar Anthony who’s work I adore. There was a fab spread of sweetie-themed snack (I had to avoid most of it as I am diabetic and wasn’t having a hypo at that point) and some daft games which we all joined in with. Amazing balloon sculptures too.

Friday; As Juliet Eve was running glitter tattoo classes (shes’ attached to Facade Glitter where I get all my glitters from) I ran my own workshop one on ‘ glittering non skin’. I’d taken wings, t-shirts etc but most of the class decided they’d like me to show them how to make and decorate a mini top hat topper on a headband.

So that’s what we did! Friday night was a bunch of competitions – the instructor’s challenge was TERRIFYING – pick 3 randomn colour cards out of a lucky dip bag- not black or white unless you’d got that card – and a theme of Paint & Powder. I was stumped! Lynn Jamieson breezed it of course!:) 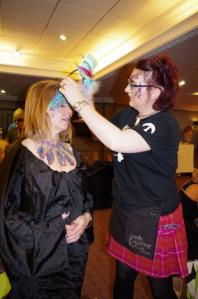 I started a glitter tattoo on the lovely Annie, who had been my face model, but I was really feeling woozy by then, so left to go to bed early after Claire from Illusion Magazine got worried at how ill I looked and made me realise I really did need bed. I think it was that night that poor Simon Smith fell asleep on one of the sofas and got ‘face painted’ by a bunch of merry people. 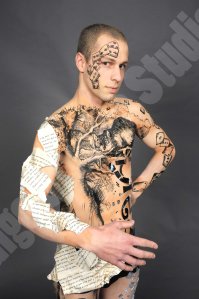 Paul from Facade Glitters was selling a new paint, Cameleon Face & Body Paint, designed by the lovely Eugenie whom I knew when she worked with Diamond FX. I’d not planned to buy any paints as I was still using up all the DFX I’d won at Phizzog that year, but then Paul demo’d it. He painted his arm, let it dry, rubbed his hand over and had a clean palm!!! – then wiped it off with a wet finger. I was impressed and bought 4 colours from them to try the next day.

I went to watch Becstar and Margi’s workshops on Sat. Then I set up (beside the amazing Lynn Jameison – eeek!) to start a bodypaint demo. Using a bunch of discontinued toadstool statues from Bewilderwood, plastic bags and tissue, I’d made a headband and decided to go for a ‘Toadstool Fool’ look. The theme we’d been given was Alice in Wonderland (the party thme for the night) so I thought it fitted. 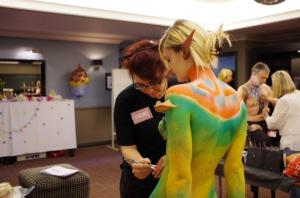 I checked with model Zoe if she minded possibly being stanined, as 1 of the new Cameleon colours I’d picked up was a greeny-blue (my fave shade!)named Celadon. She had nothing on the next day so was OK if the colour lingered – many brands do stain a bit with that sort of colours, it must be some pigment they all have to use in green/ blues that does it. 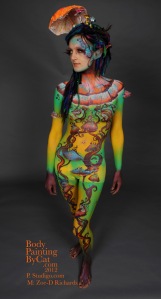 Anyway I used that Celadon, Grimas white and Cameleon Banana Yellow with big kabukis for the bases, and a large flat brush with and Cameleon Cotton Candy pink for the neck. I used Body FX toadstool boob covers and prosthetic bracket fungus, and outlined/ shaded it all in gorgeous dark metallic aubergine colour from Cameleon called Plum Fairy. More Celadon through a home-made dotty stencil to add details and I was done. I have to say I really like the paint and will be buying it when I use up my current kit! Best news was that Zoe turned up lean as a whistle the next day, the teal shade Celadon didn’t stain her – if it’s that way on most people I’m sold on it! 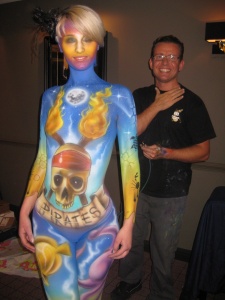 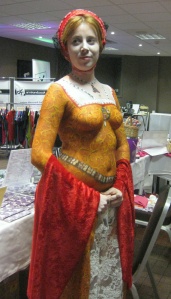 Lynn’s stunning, soft Wonderland paint with the cutest Cheshire Cat EVER was awesome – Roger wore it to the party! And I loved the intricate, vintage looking book piece Nic & Justine created. Sadly Pete washed it off as he had another costume for the night!  It was great to catch up with Mark Greenawalt from the USA – I’d not seen him since the 2 week international event we were both invited to in Shanghai. He was creating a  Tudor portrait on one of the first models I ever painted, Stacey – nice to see her too! 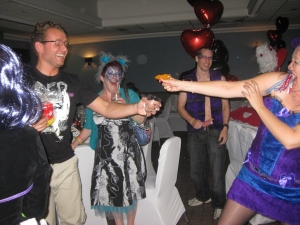 The party that night was the best fun I’d had at one of these things – mainly as all my fave painty people were there – Laurence Caird, Jennie, the Cornish Crew, etc. Madness. I went as a Cheshire Cat and so did quite a few others! We dragged the lovely, quiet Flavio into it as well – apologies for the rowdy table you had Flavio! 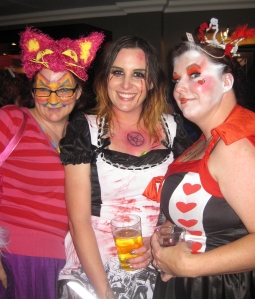 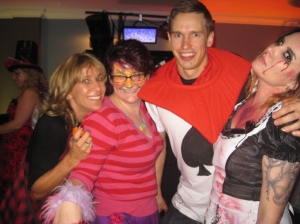 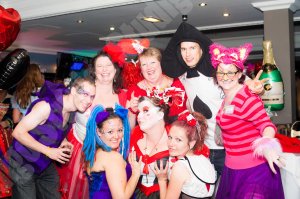 We knew (Nic’s) Pete could dance but wow, he blew us away at the dance-off – he trained in hiphop/ street  think – just amazing. Possibly he & Nic showing me the Inbetweeners dance wasn’t their finest moment but this must be the sort of thing engaged people practise together:))) Poor BecStar was getting coated in british beer too but seemed to enjoy it. 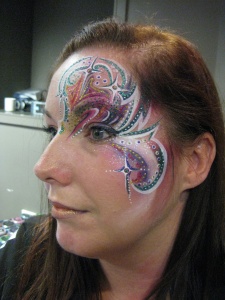 Sunday I was really feeling rotten and totally dosed up on flu pills. Luckily, Illusion had asked if I’d do my demo paint on Laurence by their stand – perfect ! He cheered me up and let me hide behind him when I felt really bad. I started a chest-piece using the new floppy vinyl Illusion name stencil the ladies had got. 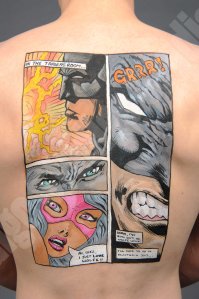 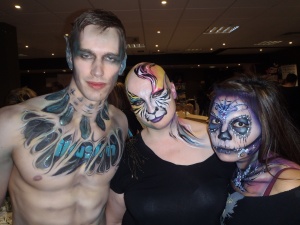 I can’t say I like the floppy style stencils, they are very difficult to use compared to mylar/ stiffer ones. And then I noticed his bare tummy button looked like a cute wee mouth…I stole a rolly from a smoker and that had its own paint too!

Sophia was painting beautiful things beside us, as was Sophia Leadill Taylor. Nic and Justine did a comic-strip paint on her Pete that was perfect and very fiddly. 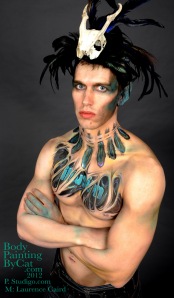 So, we eventually left tired, covered in paint/ glitter and very happy. Laurence later sent me a photo of his chest piece (again done in Cameleon paints) which he wore all day before getting dressed, packing and lugging crates of Illusion books etc up the stairs into their van, and driving home to Bristol from Birmingham. It stayed put well enough for him to use that as his profile pic for a while! OOoo I love new products that work better:)