Jennie and I have worked many times alongside the NorCon group, who dress up in asstd Sci-fi costumes to raise money for charity. Mark also runs the successful NOR-CON event, which sees fans, collectors and cosplayers come from all over the UK, to Norwich. Writers, actors and props from a range of cult films and series are invited to give talks and signings. He agreed as always to let us advertise Paintopia if we did some artwork people could watch, and collected for the charity they were supporting, Nelson’s Journey. Jennie had attended painting on her own last year (and met my hero Robert Llewellyn who love the artwork in a cheeky fashion) and enjoyed it, and as I’m a sci-fi fan I leapt at the chance.

Jennie & Vince decided to attempt a Star Trek  Borg queen, but I was feeling a bit different. All the men in my family wanted me to do Star War’s Princess Leia in her slave bikini, but as I pointed out the only paintwork there would be on the bits I covered with underwear which is very hard to paint on. 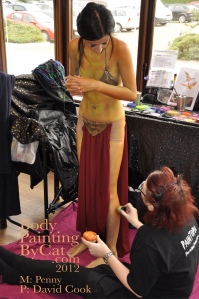 So, I went for a combination of one of the more colourful aliens – the fltting Turuk beast ridden in the Avatar films. The gorgeous Penny, who had been a demo model at my Paintopia glitter workshop, offered to come and be the body. I bodged up a quick bikini using a cheap set of underwear and an old cloak!

We were busy from the start, with lots of questions and Kerry being the PR person for Paintopia. Jennie was learning a lot as Vince had made all the Borg prosthetics, and they needed a lot of gluing on. Steph, my stunning Patronus Pixie, was being their evil queen. 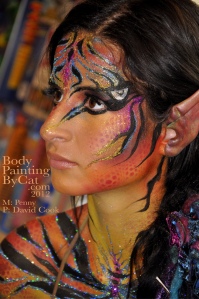 I did a colourful base with black stripes based on the Turuk patterning, and outlined the stripes in glitter tattoo using the equipment I sell, as well as Facade cosmetic glitters.

– the amazing Captain Jack Sparrow impersonator, Melo,  from Great Yarmouth. He really IS Johnny Depp in character, even in the staff room!

– getting a photo with and a quick chat to the lovely Robert Llewellyn. Kryten rules!!!

– Mark’s very cheeky and funny commentary as he remote controlled his life-size replica Dalek. We’d never been heckled by a robot before! 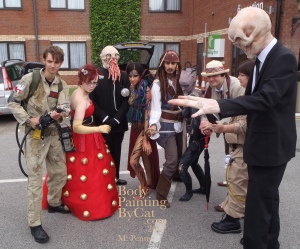 Thanks to Mark/ NorCon, Penny, and all the fab photos are David Cook’s (the bad ones are mine!)