This was a stunning idea Jennie had for Paintopia – lots of professional (and non!) face painters never tried a body paint as they were too shy/ nervous/ unsure of how to set one up. (Not me – I just went ahead and did it!). She designed a competition – more like a set-time workshop really – where she teamed up experienced body artists randomly with newbies. We had a few weeks to talk on email etc, some even meeting up to practice together. 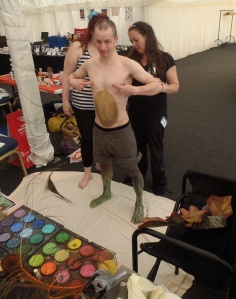 Nic and her ‘apprentice’ Carla -Jayne starting to paint Pete.

The very sweet Italian Teresa Antinoro from Milan had been paired with me for this. TBH she is a great painter already and I don’t think she really needed help, but it was nice to chat as we worked. She went on to do well in some EU bodypaint comps that summer!

It was a genius idea of Jennie’s; put a novice painter with someone much more experienced to give them the confidence to have a go at body art. Sadly Italian is one of the languages I know nothing of (German, French, and Dutch I’m OK at and I even have a smattering of Cantonese and Spanish). 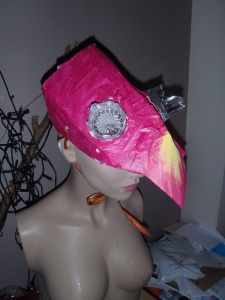 We’d chatted a bit on email and had a few ideas, so I’d made a giant paper-feather bird head mask with the smashed out bottoms of the plastic LED lit pint mugs I’d got from the HK Rugbys 7s as eyes.  Elisabeth, who I’d painted for the My Bloody Valentine shoot, was our model.

I used sculpted foam-latex breats covers from BodyFX NZ again, love them! 1-stroke cakes were just getting popular so I’d bought a new one ( Iusually made my own), showed her vaguely how to do feathery patterns with the flamey colours, and we ‘feathered’ Liz then drew a flaming pheonix on her tummy.

A lot of pinning and fiddling fixed on the bird head, and a tutu/ bustle I love which I had got from Fairylove years ago (and no longer felt brae enough to wear). 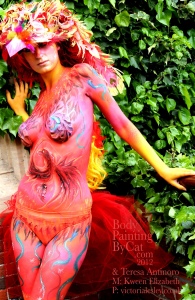 A bit of glitter tattoo was added with the freehand glitter tattoo bottles and tips I sell, and off Liz went. We didn’t win but it was nice experience and I LOVE all the different shots the photographers took! 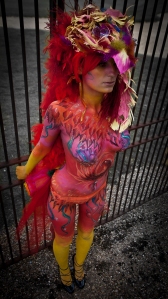 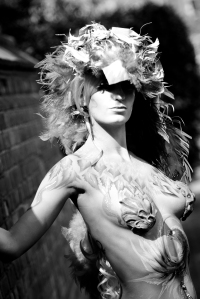 These 3 photos by the IsnapEvents Photographers who set up a green-screen shoot in the painting marquee on Sunday, which was Paintopia’s public open day.

I think Liz quite liked this paint as she stayed in it until the last possible moment!