This was a favour for a friend’s of my husband’s when we were trying out our yurt on his farm.

Pete was helping to build a cob sweat lodge for his friend Lee when a shoot came up for Upstyler Magazine that Lee wanted some help with.

The lovely Verity (a young brain soon to be studying chemistry at University) came up from London to do an ‘upstyle’ retro fashion shoot in the farm. The idea was he wanted her to have a Suicide Girls type tattooed arm sleeve, to show she didn’t have such a sweet history. 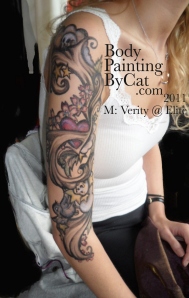 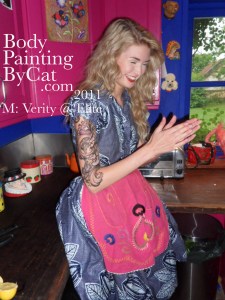 I used the Temptu Pro Dura Inked temporay ink palette. It’s pricey and time consuming, as you have to ‘melt’ the solid inks with some isopropyl which evaporates so won’t stay ‘wet’ like paint, and then you have to powder it down to fix it. But looks fab!

Several hours work and in the published magazine only a peak of my painting, but fun!

What made me laugh was Verity liked it so much she wore it back to her agency chaperone’s house in London and the poor woman nearly had a heart attack! Until Verity wiped it off with isopropyl alcohol. 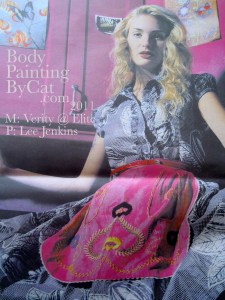