I had seen a stunning piece of film shot about Simon Smith when he bodypainted a female  Predator warrior on Mel (my Frost Fae last year), shot by Tantrwm Films.

I commented to them that it was one of the only beautifully shot bits of bodyart I had ever seen – sadly far too often we get portrayed as a bit of a laugh or a silly giggle or a bit rude, at best as fast reportage type stuff. But this was stunning and nicely serious, just perfect.

To my delight the film crew asked if I’d like to create a clip too! Yes please! They planned these as a taster to show backers and companies they hoped to interest in doing a longer film about the UK bodyart industry.

So I drove over to Wales (yes its the opposite coast of the UK, but I got to stay with my mum for the weekend and she got to see Finley), in Feb, to meet them. 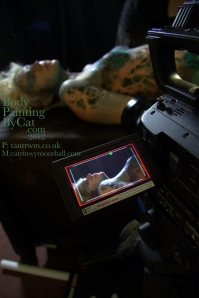 A friend of theirs, singer Catryn Southall, had a new album coming out with an ordinary-people-can-be heroes- theme and we’d worked up a vague alt superhero idea. She has an amazing career, check out her site!

Enroute I’d stopped at Facade glitter, who had some new greys, greens and dark green metalli glitters I was keen to try. Luckily Catryn liked the idea of a steamp-punk-cyborg look, so I set to work. 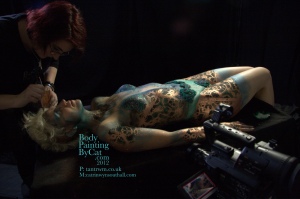 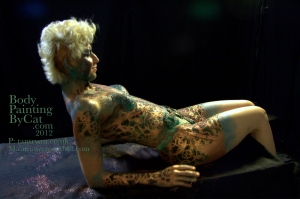 Over big pants and custom-cut bra inserts (made to look like an array of cogs and gears) I brushed a base of metallic powders and mixing liquids with some Kryolan Interferenz. 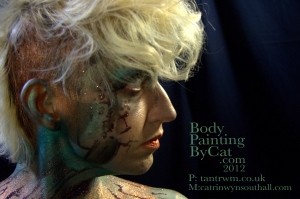 I then stencilled many areas with a computer-cut large stencil I found on eBay, and some smaller DIY ones I had made.

Finally, using the cosmetic adhesives and bottles I sell here, I did sort of circuit-board freehand glitter tattoos all over her. 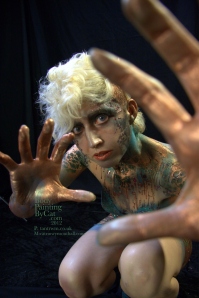 It was funny as our nicknames were both ‘Cat’, so whenever the film-man asked 1 of us to move we both did!

Here is their film – I LOVE it, its magical! OOOOOoooooo! Hope they get to do the whole thing!

my terrible snip of the artwork: