At the last minute (the week it closed!) I heard that the Phizzog Festival was hosting a postal competition before its main, live weekend of events, and really wanted to enter as I often miss these chances. (The Phizzog Festival was set up by Carrie & Billie Hoyle along the lines of the much-missed, internationally attended Welsh Face & Body Festival, and also the UK Body Festival, both of which were cancelled this year. It was to be hosted in Folkestone along with the world-famous Folkestone Art Triennial.)

It was a bit of a scramble, but luckily at such short notice, I managed to find a model and a photographer (he tried to help me pick a new camera in the camera studio he works in when my snappy cam AND my good camera broke!) to join me. We were in the middle of funerals and moving house, so the only day I had free before starting the summer holidays for Bewilderwood (I don’t take days off then) was the Friday we were due to move into our new house and take down the yurt we were living in!

Luckily hubby Pete agreed, so I drove all my painty kit to the new house and set up in the empty sitting room – I had to go buy mugs etc as we had yet to locate all the house stuff we stored when we emigrated to Hong Kong!

Steve Hone, the photographer, mainly shoots motorcross and wanted to try more portrait etc styles, and model Marie had never been painted either. Both were interested in the whole process.

The Theme for the postal comp was the same as for the main day – “Where Art Thou’. I knew a lot of people would do artist-related pieces but I’ve done that before and fancied something a bit more off beat, so went for Juliet’s “Wherefore Art Thou Romeo’ line. The most iconic (to me) visuals of that were the Baz Luhrman/ Di Capreo/ Danes film version. I hadn’t had time to plan or sketch so it was all a bit off the cuff (as usual?:)). 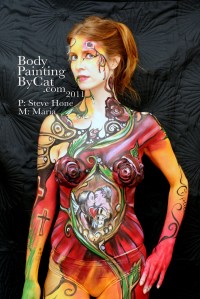 I used a set of BodyFX NZ’s sculpted foam latex boob covers in rose shape to cover Marie, and the main colours I used as a base were a dark Grimas red from Facepaint UK, with a gorgeous Diamond FX golden yellow. 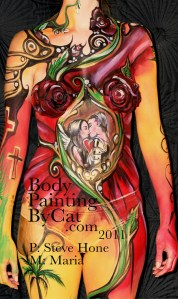 The central scene is the iconic kiss when they meet at the fancy dress ball Juliet’s dad throws to introduce her to the man he wants her to marry. Romeo is a hated rival’s son, sneaked in by a friend of both families. Hidden by his armour, he spots the ‘unknown girl’ in her angel outfit and they fall in love.

Roses stand for love, the flowers he climbs up to sneak into her balcony/ room after they marry in secret, and the gunshot wound on her head (the one that killed Mercutio after he cursed their warring families AND to represent the headshot she gave herself on waking from her fake ‘death’ to see Romeo dying of poison beside her) dyes them red. 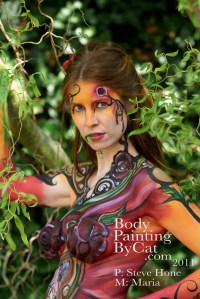 The green trailing from her lips to form the rose stems is for the sleeping potion she uses to fake her death, and the real poison Romeo takes when he finds her ‘dead’ after missing the messenger telling him she’s only faking it to escape her family.

She’s got the sunset on Verona Beach on her arm/ leg where a lot of the action takes place and Verona, Capulet & Montague written on her in various places. Her other arm, below a version of the armour Romeo wore when they met, are the crosses displayed at her funeral and the plant her priest made the sleeping drug/ poisons out of. 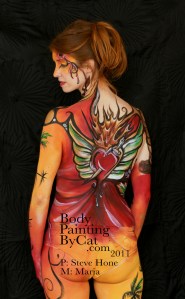 Red is the gathered red velvet Baz always uses to symbolise love, & his ‘Red Velvet’ series of films (all tragic love stories – includes Moulin Rouge). The flaming stabbed heart on her back is another of his true heart symbols, as well as being a religious theme in this film and matching the modern tattoo style of the film

I ran out of time to do much with her hair, but a rose-decorated clip, with a pair of baby real-feather angel wings harking to her ball costume and tragic end twisted round it, and a few sprays of some l’Oreal hair products to hold skeins of hair out of her face but give a slightly loose and tangled look finished it off. (The L’oreal site www.yourstyleyourstudio.com/ had some interesting ideas – you click all the wee icons representing assorted styles etc and it pops up some photos along those lines and what products are needed to do it. I’ll be going back to play there.) Later for the outdoor shoot we just loosened her hair for a diff look with a vague quick attempt to recreate Claire Dane’s hairstyle from the kiss scene. 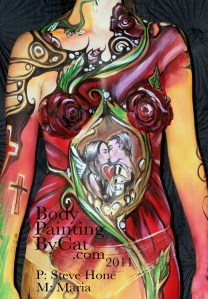 Including lunch, this was 3.5 hours painting as that was all the time I had before the removal van joined me in the new house! Which is now christened with a red footprint on its beige carpet, oops. Got my priorities – no kitchen, no furniture aside from 2 bean bags & Finley’s cot, but all my paint kit is in!

No idea how we did in the competition but it was a fun paint.

Just heard I was 2nd in the Phizzog Postal comp!

Huge thanks to my model & photographer, Carrie & co for organising it all, and  the sponsors,Facepaint UK and Armankandi.co.uk.