I first began face painting ‘in public’ at huge events like the Suffolk Show, when I was Education Officer for the Suffolk Wildlife Trust (after I left the zoo). When I became a free-lance full-time face painter, I painted for various organisations attending these events, such as the Rare Breeds Survival Trust, and even (GASP) went as a member Of the public for the 1st time. (Usually I’d  just get to dash around some of the stalls on my breaks in full fairy outfit).

The Royal Norfolk Show is the largest (and one of the oldest?) 2-day agricultural shows in the UK. Bewilderwood decided to go for the 1st time in 2010, after myself and many others had said how well they would suit it and how many local attraction did go. That year we were in a rather randomn spot, but they built an open-topped square site that won some awards. 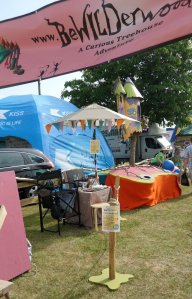 This year we had 2 square marquees up in the school section. I’m paranoid about being late for bookings and both days arrived extremely early, setting up before the rest of the Twiggles arrived.

The second day, everyone else was very late…they car-shared so I assumed they’d be there soon. I’d finished my set up, but still no sign of any more staff though some of the other stalls were starting to open (this was still very early and the show was still quiet). 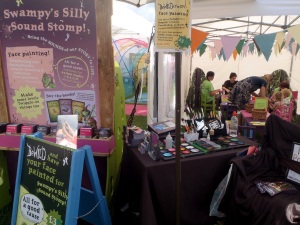 I decided to start setting up the craft tables in our tent, and as I was dishing out crayons and righting the child-sized chairs, noticed movement in the back of our marquee. At first I thought it was someone on our team creeping up on me but finally I managed to catch 1 baby pet bunny (the rest scarpered)! 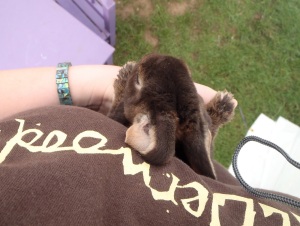 At that point a bowler-hatted steward arrived (seemingly un-fazed by a facepainted elf clutching a live rabbit) to ask if I was ready to lead the story-telling onstage in the kids area. Errr…? I might have managed the regular show alone as I heard that daily, but I knew Sheila planned a special thing for this event.  Panicked phonecalls from me started….It turned out there had been multiple RTA’s and the resulting jams, along with the usual RN Show extra traffic, had gridlocked half the county. 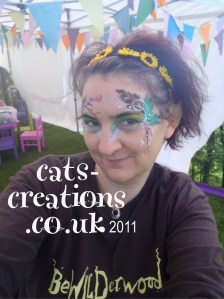 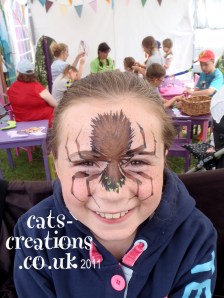 LUCKILY they arrived just in time, so some set off to storytell whilst other finished opening up the marquee, leaving me to quickly trawl the show looking for missing rabbit owners – turned out it was a farm-park stall a few rows away who said this batch of rabbits were the best escapologists he’d ever had. 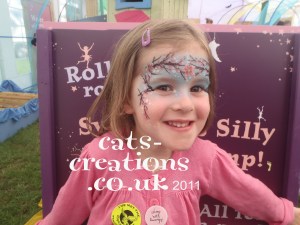