Another shoot from November, with photos embargo’d until now when the March 2011 Issue of Illusion Magazine, which contained them, was published. Been killing me to keep  them hidden, loved these!

Hayley Bird had ‘found’ me online just after I emigrated to Hong Kong, which was a shame, as she was in Norfolk, where we had just left!

When we re-emigrated, she was often posing for camera club shoots friends of mine were in, so we arranged to do one together. The female photographers were especialy happy as I had the impression most shoots were ‘glamour’ style and the girls wanted some variety. 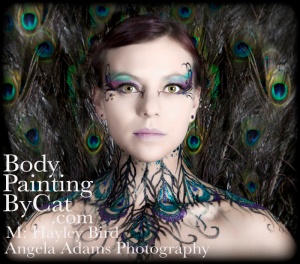 Hayley’s a stylist/ make-up artist, but also a very good model. She turned up with a case of clothes; I had a bundle of feathers. We decided a plain black corset & sleeked back hair looked best. For a change, I fancied attempted symmetry, in a ‘collar’ pattern. Doodly drips were very hard to control as this wasn’t really one I could paint with the model lying flat.

But I loved the effect. It later reminded me a bit of the neck jewellery the head vamp queen gets killed in on the train in Underworld… need to watch it again and see, I think!

Huge thanks to Hayley who I later hear had cancelled a lot at a tough time to come work with me, and thanks to Michelle & the camera club whose fees in a slow season allowed me to fix my broken car AND get more glitter tatt supplies just in time!