Another shoot from last year (Dec), with photos embargo’d until now when the March 2011 Issue of Illusion Magazine, which contained them, was published. Been killing me to keep  them hidden, loved these!

Lara is a make-up and hair stylist as well as a model. We met online ( I really want to do an underwater shoot which she & Jack have done several times) and met up in Bristol – the other side of the UK from me, but my mum lives there so we made an early Christmas visit for a few days. Jack is an amazing photographer.

Anyway I went over just before lunch and spent around 4 hrs glittering her, and blathering my head off at her, as she lay wrapped in blankets on the floor of her flat.  Jack made an amazing sphagetti too. 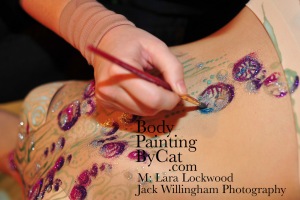 I’d spotted some wierd Christmas glitter baubles which I’d brought, along with some shiney balls in matching shades, so that was my inspiration.

Finished, Lara dressed (as the glitter tatt can’t be damaged) and we drove to Jack’s family house studio. I sat in awe as Lara whipped up an amazing hair creation on herself, and added a few glittery bits to her lovely face makeup. Then the pair were off and shooting in the chilly studio.

Lookout for more of theme in Illusion..and with me at some point, hopefully!

And yes the baubles made it onto my tree:)