Rather stiff from lugging my heavy kit around London (sorry guys, Hong Kong wins on the underground train front – MUCH easier to navigate and far fewer stairs!) it was back for day 2 of IMATS. The morning was a ‘pro ticket only’ event which meant it was a lot quieter; most went to see the youtube guru demos, etc, and stalls were less busy as the ‘public’ wasn’t allowed in the 1st few hours. Shame, really, bit of a waste… maybe making that time pro-only shows would have worked better?

Anyway for a different look, I decided LL was going to be a sort of Wood Satyr. We had a set of foam latex horns and ear tips, again from Russ Hughes, which I glued on. Using a 1-stroke/ split cake I made myself with Snazaroo colours, I began sort of following LL’s contours. It started looking a bit 70’s wallpaper:) If we took a break he had to hide from his fans or he’d constantly be begged for photos/ chats and couldn’t eat! 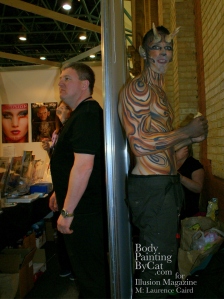 At this point my model from Wales 2010, Stacey who was my Spirit Shamen in August, turned up in a tizz. (With a cute bag printed with photos of her bodypaint modelling inc my Spirit Shamen).

She’d been booked for an airbrush artist to paint, but after a rule change or something the g-string & nipple covers she’d bought weren’t enough cover. LL had (clean!) spare grey boxers which were, with a bit of genius, transformed into a boob tube and boy-short set for Stacey to be painted in! Very clever… 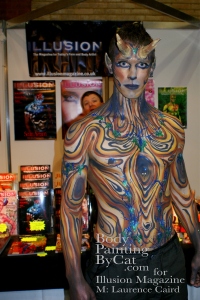 I was quite pleased with the wood grain look – fairly fun & easy to paint and I had decided for once to NOT use any black, going for dark grey instead. LOVING the new smallish dagger brush I got from Bibi (used for the dark lines) and the kabuki for shading, again. Amazing how many of the questions asked were about the 1 stroke/ split cake, seems the make-up world is not onto that trend as yet…

We could have let the LL there, but several painters, inc Lone Wolfe had asked if I’d demo my body glitter tattoos as well. Seeing as that’s what the article in the next Illusion mag about me will be on, and I love doing them, we did. 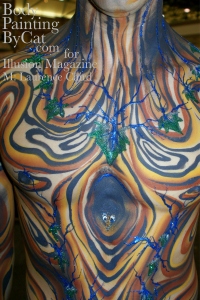 Poor LL, last (1st!) time I painted him, in Dec in Bristol (not blogged yet as can’t publish pics till Illusion does), he ended up with a very intricate, hard to remove tatt on his chest and is still finding glitter all over his flat!

So this time I tried a new waterbased cosmetic adhesive from Mouldlife, which I was told by another artist still dries tacky but is easier to get off than Pro-adhesive, and, a huge plus, is a fraction of the price!

I decided on sort of  ivy leaf ‘tribal’ chest and arm jewellery. And a tiny wee googly-eyed owl in his chest knot hole.

After proper photos we did a tour of the stalls, so I could nose and LL could hand out his modelling card. And try to reclaim his shorts from Stacey (the boob tube ‘appeared’ on his computer at work I hear:))

Ladies, not only is he sweet & gorgeous AND working full time as a scientist,  you can now hire him to model!!! 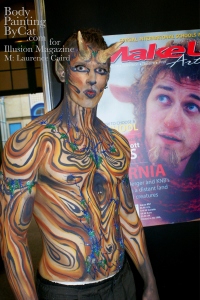 As for the rest of the show; I loved the chinese-paper-cut lashes, intricate little black pictures really. And the Makeup Museum…a few I couldn’t place but 1 from HellBoy I knew well. The actor in it (can see where it was peeled off round his mouth, I think?) mustve been soo skinny…hang on I thought it was CGI. Hmm have to watch it again!

There was also a v cool machine you gripped that coated patches of glue on your skin with ‘real’ looking fur pile – static electricity or something. 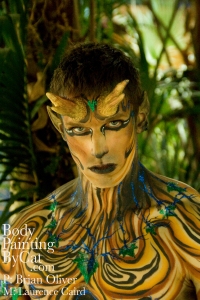 But all in, we were very well-received and answered a LOT of questions (yay for me I bodged through some in French, German and Dutch!) as well as posing (well, LL posed, I just painted and tried to keep my concentrating-tongue IN my mouth) for 100’s of pics.

If anyone does see us in photos/ videos anywhere do please tell me – I’d love to see the footage of the film crew who asked Satyr-LL to ‘say or do something’ and he gave them a load of cheeky tongue action! 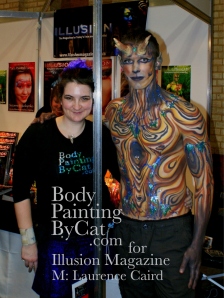 So huge thanks to Laurence Caird & Illusion Magazine, a brilliant, interesting,  fun weekend. And no I’m not hunchbacked I’m just leaning my head forward on the post for some reason….