The HK Youth Arts Foundation kindly once again invited me to be the lead artist/ sole bodypainter for the HK  Rugby 7s, and as in 2009 (when I was in NZ) flew me to Hong Kong to take part. And this time put me up in a lovely hotel as well (before I either was living in HK or borrowed a friend’s place to stay).

After 6 hrs on a bus, 13 in a plane and another 90 min bus transfer, I arrived late Tuesday, pigged on my fave sushi, (not the HK delicacy of fish-heads as in the menu below!) stocked up on local essentials like Apple juice with Aloe chunks and crispy egg tarts, and crashed into bed.

I had a free day on Wednesday so arranged to meet up with (and decorate) my friend & glitter muse, Symone of Pole Paradise. I arrived at her studio full of jetlag, but excited to be back in HK – its a lovely city I feel very comfy/ safe in, and if not for the pollution/ the climate’s effect on my toddler, we would have happily kept living there.

Symone asked for a feathery glitter tattoo leotard to perform her aerial silk/ hoop routines in. She had a new white suit on, ready to be glittered, so I started on that as we blathered away at each other catching up on what hadn’t been said in a year of emails & facebook. She also read the article on my glitter work in the Spring Issue of Illusion Magazine, as a lot of that was really about her, although all the photos they used were from newer, then unpublished, shoots of mine (see previous posts on here!). 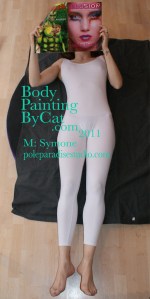 Albert of shizznitt.com who did the brilliant speeded-up video of me doing a goth necklace body glitter tatt on Symone last year  – video here – had to work elsewhere, but set up his camera system and left it to auto-record the process of the peacock glitter leotard. 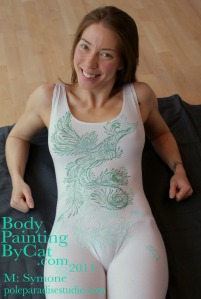 It was interesting doing a white rather than flesh-tone leotard (is my 1st on white!) as the green crumbs of facepaint I use to tint the glue (which otherwise dries invisible, as it goes clear) showed up darker and darker as it dried. 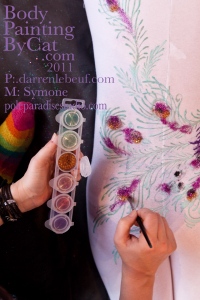 The design morphed from abstract feathery peacock into a very chinese-paper-cut style pheonix, really. When I had glued (3 layers so it stops soaking into the cloth and stays tacky on the surface) and glittered the front, we stopped for lunch (she ordered in some of my fave fried rice – I MISSED HK food!!!). 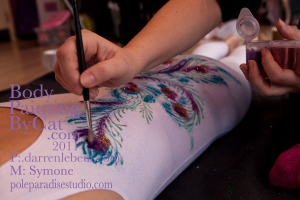 As usual we were fitting in with her teaching schedule so had most of the afternoon to paint and shoot the results in, before her evening dance students arrived. I think we did maybe 3 hours work on the glitter, about the normal time…. 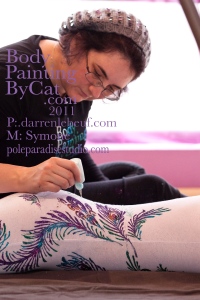 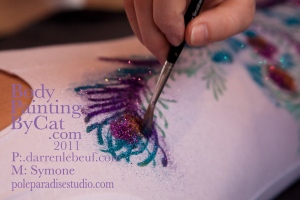 Darren LeBeuf, the photog who shot the last bodypaint event I did before we left HK (Canadian Chamber of Commerce Northern Lights themed ball) popped in to take pro shots for us. 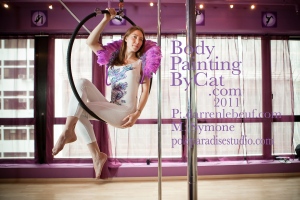 Albert has done the time-lapse video which I have to share. She honestly is NOT as much of a chatterbox as she looks, we were nattering plus Symone has to run her studio from her mobile whilst we work! 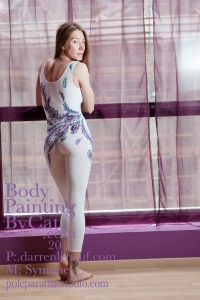 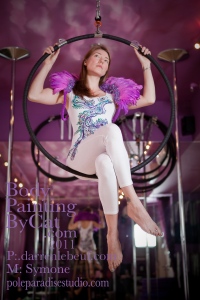 Thanks to Symone, Al, and Darren. 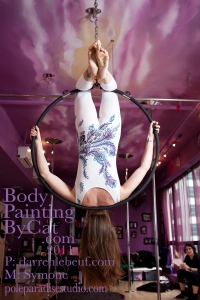 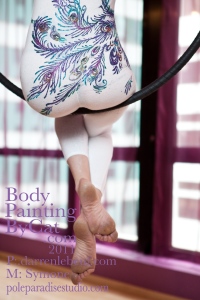 LOVE the music too, Al!