The usual – I arrived early to start bodypainting my regulars and some new clients who all booked in in advance by email.

They pay a fee directly into the charity box and I have approx 1 hour to decorate them. Chris &  co wanted to be RED Avatar aliens this year, with HK white flowers on them to support their country. 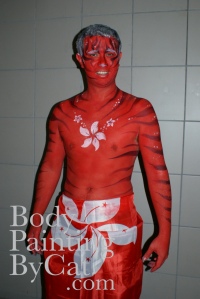 Gareth was my blue Avatar; he’d gone all out, dyeing his shoes and shorts blue, and making a leather ‘skirt’.

What was funny was when we were emailing back and forth, I mentioned he’d probably want to make some ethnic leather & feather jewellery to go, and that I had some braided thongs (as in necklaces) I was making for the other avatars if he need them. He thought I meant a butt thong as the aliens wore in the film!

Gareth looked perfect, and was mobbed all day – he said he hardly saw his girlfriend and didn’t want to smoke as he had kids following him in awe. On the plus side he was let into the ‘closed’ South stand as a TV crew there wanted to interview him! 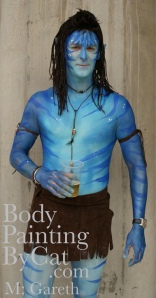