Mainly a day of painting faces, of course, but I had been asked to do a shoot for ‘The List’, a magazine in HK. Luckily the Rugby organisers also wanted me to demo for a bunch of Press, PR & VIPs, so my boss Pat was persuaded to pose for it. 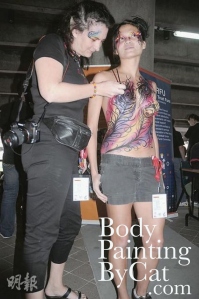 As this was all last minute she hadn’t had time to buy some cheap bikini tops I could paint over, but luckily I still had a pair of latex boob covers in my chair from a booking the week before. We popped them on in the ladies, (body glue – so actually sfaer than a bikini top – can’t gape or be untied) and once I had a quick coat of colour onto her, went back to our stall to keep painting.

As usual people were fascinated, and kids kept coming up to ask what it felt like and if they could touch it/ her. 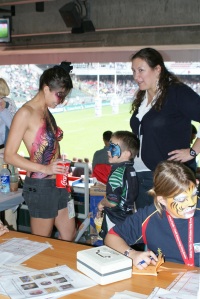 I did a fairly fast (with interruptions for posed shots, VIP’s to pretend to paint, etc) on a feathery theme seeing as the boob covers were sort of swirly.

The List’s photographer couldn’t get into the stadium so after I painted Pat inside, we nipped out to meet him on our very late lunch break. 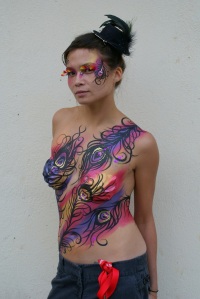 Interesting reactions as we walked round – some fans didn’t notice, others did total double takes. I think its as the breast covers meant there were no strings/ straps and some people thought she was naked. With deformed boobs, I would imagine!

So we were furious, the next morning, to discover one of the journalists who had stayed for the entire paint, asking lots of questions (and repeating rude ones and ones about money – we all work at charity rate for the rugby AND YAF is a charity AND all the money taken on the days goes directly into Rugby charity boxes) had published photos and an article in the main chinese paper ranting about a naked woman at the event.  As you can see Pat was in huge shorts… AND the journo had kept asking about the boob covers and even touched them. Sigh.

The List  magazine was published a month or so later – a page on ‘how to be…a bodypainter’. Cool!

Very blury video of Pat organising the queue in my stall…