This was an interesting one….all designs  were discussed and Ok’d in advance. I had made stencils of the small logos (french icons – it was partly to celebrate Le French May) and the lettering, as the client wanted 3 models painted in 3 hours which means NOT a lot of details were possible. Especially as the fabric they wore was awful to paint on.

But the surroundings…well, we started with my paints sat on an empty beer barrel, in an open alley which security used to walk between bars along the street! 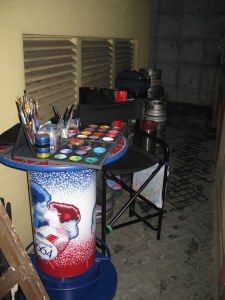 It was too dark for even my head torch, so the bar gave us some red lights. As I was painting the 1st body red, that was not very useful and was eventually changed. The client changed his mind several times and wanted the 1st body repainted which was not possible in the time allowed, but eventually I managed to adapt it and they were happy. 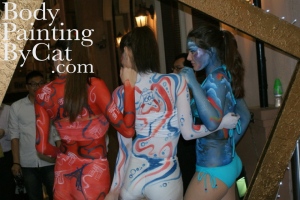 The 3 girls had to walk through the crowded bars and back and then I had to sit and paint the rest of the 4th & final girl in public following ideas from the crowd.

These included Deep water Bay and a chinese junk…. Then they had to pose with the public for pics.